By John Sharpe
September 17, 2008
Sign in to view read count 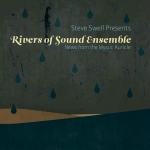 Steve Swell&amp;#8217;s third release on the Polish NotTwo label moves the trombonist into new, though not entirely unfamiliar territory. On this occasion, his regular Slammin&amp;#8217; the Infinite band has expanded with the addition of trumpeter Roy Campbell to become the Rivers of Sound Ensemble. Hilliard Greene, who plays in Swell&amp;#8217;s quartet with Gebhard Ullmann, takes over the bass chair from Matt Heyner, with drummer Klaus Kugel and reed maestro Sabir Mateen as holdovers.

More significant though is Swell&amp;#8217;s dispensation with composition for the three 20+ minute pieces presented here, each sporting group credits suggesting a collective genesis. That&amp;#8217;s not to imply that this is merely a set of free jazz blowouts, though there are some cathartic moments to be sure. What&amp;#8217;s striking is the restraint on show and the spontaneously conceived arrangements, which conjure a different setting for each horn soloist: evidence of the protagonist&amp;#8217;s years of hard won experience on the New York free jazz scene.

Campbell and Mateen share frontline duties alongside Swell in William Parker&amp;#8217;s Little Huey Orchestra and are also featured in the trombonist&amp;#8217;s Nation of We big band, so their empathetic understanding comes as no surprise. More of a revelation is the assertive intent displayed by Greene. Active across genres (from Charles Gayle to Jimmy Scott), the bassist really steps up to the plate here, such that the lengthy opener, &amp;#8220;Journey to Omphalos,&amp;#8221; sounds at times like a concerto for arco double bass, as Greene dazzles in measured dialogue with successive horns. Kugel also achieves a zenith, allowing more air than usual within his polyrhythmic drive, to great effect. Although the nominal leader, Swell takes no more solo space than anyone else, while making his customary full use of the trombone&amp;#8217;s dynamic possibilities.

&amp;#8220;Journey to Omphalos&amp;#8221; sets the template, opening with an elegiac blending of mournful horns in loose three-way colloquy, simultaneous improvisation being a favored Swell gambit, before Mateen&amp;#8217;s tenor launches on an extended foray, with Kugel particularly responsive to the eddies in the saxophonist&amp;#8217;s flow. After a sequence of solos, a more subdued brooding passage ensues, before Mateen, this time on alto clarinet, ignites spirited dialogue and more garrulous horn interaction culminating in a sustained unison to close.

&amp;#8220;Healix&amp;#8221; has a more dreamy feel, at least initially, with the interweaving horn lines giving way to a spell of arco bass and sparse drums reminiscent of Julius Hemphill&amp;#8217;s classic &amp;#8220;Dogon AD&amp;#8221; in its rhythmic slash. &amp;#8220;News From The Mystic Auricle&amp;#8221; features an opening prologue where first Campbell&amp;#8217;s pastoral flute, then Mateen&amp;#8217;s more fluid take on the same instrument, partner Greene&amp;#8217;s squealing arco. Rounds of solos lead to another rousing three horn front line, listening and responding in a seamless flow before a whispered finish closes another exhilarating journey.

These guys are masters of this art and close listening reveals a wealth of incidental detail, particularly from the rhythmic axis of Kugel and Greene, which illuminates this highly recommended outing.

Journey to Omphalos; Healix; News From the Mystic Auricle.