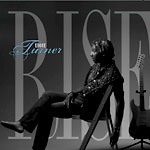 Blues/rock singer/guitarist Eddie Turner makes his statements loud and clear. A powerful backbeat, throbbing bass pulse and loud drums back up his lead guitar and emotional vocals with a solid wall of sound. His passionate blues message bores its way into Turner's audience without hesitation.

With his cover of Jimi Hendrix's "The Wind Cries Mary," Turner explains a few of the secrets involved in communicating on a personal level. Yet he keeps his distance. His original, "Secret," co-written by David Givens and Candi Givens, offers a better interpretation of a similar message, as his upbeat, contemporary affair turns wild and loose. A gut-wrenching electric guitar solo tells the story better than a thousand words could.

Turner brings roots blues into his eclectic program through originals such as "The River" and "Resurrection." These turn out to be the best selections of the album. His guitar weeps gently with convincing passion, as his message is passed on with authority. Turner's cover of Johnny "Guitar" Watson's "Gangster of Love" adds a sparkling rhythmic groove to the program and features the leader's blazing electric guitar.

Elements of gospel, blues, country, blues/rock and funk give Rise plenty of variety. Just pick your favorite and it's there. Turner is at his best, however, only when delivering an original message with pared-down accompaniment.

Rise; Ask Myself Why; The River; The Wind Cries Mary; Resurrection; It's Me; Gangster of Love; Sin; Play it Cool; Privileged Life; Confusion Illusion; Secret.