By ANTHONY SHAW
December 26, 2008
Sign in to view read count 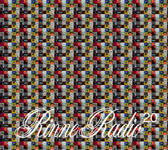 Tapani Rinne is a name as integral to the contemporary Finnish music scene as is Jean Sibelius. Which doesn't mean to say that Sibelius was a covert jazz connoisseur, nor that Rinne has achieved worldwide acclaim amongst the general listening public. But to any who have followed current trends in modern Scandinavian music, be it hip hop from Jimi Tenor or the classical crossover of violinist Pekka Kuusisto, the band RinneRadio is synonymous with experimentation both saxophonic and electronic.

This double-disc compilation shares the same title as the band's anniversary. Divided between one rhythmic and one more ambient selection of ten songs each, RinneRadio 20th Anniversary Album reflects the range of Finnish collaborators Rinne has worked with over the past 20 years. The tracks were selected following a canvas of local Finnish club and radio DJs, tasked with selecting their own "dream RinneRadio album." The track list reflects a separation between the two extremes of his output, making for two very different but both very homogeneous discs, despite their lack of chronological order. The first dics features a number of pieces familiar to his dance-orientated fan base, including the trumpeting, stomping, anthem-like "Nooga" from album B and the moody, meditative vocal trip hop of "Aromaa Alt Too" from 1996's Rok. The second disc features more meditative tracks, lacking the strident percussions needed on the dance floor, but with sparser electronic rhythms similarly overlaid with Rinne's often mellow saxophone and other reeds.

Having started his career and, in fact, this band with the luminary drummer Edvard Vesala , Rinne played with the equally iconoclastic American/Finnish guitarist Raoul Bjorkenheim, as well as working with the major big band in Helsinki, UMO. In the final years of the old millennium Rinne's music moved towards more compositional work. He collaborated with radical rock accordionist Kimmo Pohjonen on the string quartet-accompanied album Kluster, as well as writing music for the Swedish TV series Insider. In his private ventures, however, Rinne has kept up his links with the dance floor, working with local DJ Slow and producing two albums. At the same time he also continued his association with Saami yoik-song specialist Wimme, working in a near-folk idiom. This compilation, however, concentrates on his work under the RinneRadio epithet, lacking any material from these ventures.

As an introduction to the varied output of this original and talented Finnish composer and reedist, this double-disc set is a good and attractive overview. The gatefold presentation is colorful and compact; Petri Silas' liner notes are concise and informative. Maybe much of Rinne's valued collaborative work is missing, but the breadth of his output is well represented. Whether the following 20 years will see such a diverse musical output is a worthy speculation.