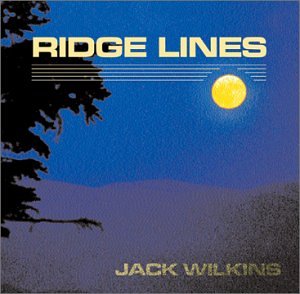 " Ridge Lines ," read the album's liner notes, "is Jack's second CD release, following Artwork , which was well received by critics, jazz radio stations, and a few normal people." This is a double loss—for the critics, who secretly crave the acceptance of the public while professing indifference, and the majority of "normal" folks, who are missing out on some fantastic hard bop and swing.

Wilkins has assembled a fine ensemble for his second outing, most noteworthy among them pianist Clay Perry and guitarist Barry Greene. The core group balloons into an octet for the opener, "Walt in the Trap," but the size has no encumbering effect on the music. "Walt" is a colorful, all-out sprint, with a head that explodes in multiple shapes and positions like a Fourth of July fireworks finale. Perry boxes out the melodic lines on his piano; drummer Danny Gottlieb skates along without touching the ground. Trumpeter Scott Wendholt has a mercurial solo (beginning slyly and dissonantly before he can no longer resist keeping pace with the others) after Wilkins' own rather breathless run. Greene caps the line of solos by putting his frantic fingers to work.

"Cape Waltz" tugs on the reins. No less nimble than "Walt," on the whole it's far mellower. But there are some idiosyncrasies: Gottlieb makes a succession of cymbal splashes behind Greene's and Wilkins' solos and on the closing head, as if emphasizing every bar. This seems like overkill. It has the same effect as a writer putting an exclamation mark after every sentence—eventually the reader becomes either exhausted or emotionally immune. And the synthesizer, played by Chuck Owen, sustains big, fat, single notes in the background, particularly on the last note of the head, making parts of Wilkins' original chart seem unintentionally sentimental and gimmicky.

Owen's arrangement of the Sol Parker and Henry Sanicola chart "This Love of Mine" is anything but sentimental and gimmicky; it's a smooth, sunny, swinging number. Here the group is augmented to an octet again, and the sound is as rich and enveloping as a big band—an impressive contrast to the tight, breakneck "Walt." Another arrangement of a standard, this one Wilkins' take on "Singin' in the Rain," is lush, enthusiastic trad jazz, though Perry delights in some acrobatic transformations of the tune on his solo.

The remaining four tracks show no sign of fatigue or sameness. Owen's "A Ridge Away" is a moody midnight ballad; "Shorter Path" has an affable swing. Then there's the gentle exoticism of "Tuscan Hills" and the cheeky funk of the closer "Glib." Accessible and occasionally adventurous, Ridge Lines should extend Wilkins' audience beyond the circle of esoteric critics and jazz DJs and find favor among greater numbers of normal people. That way everybody wins.