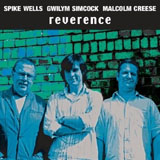 Given its often spiritual nature, it's not surprising to find men of the cloth with a deep love of music. Still, finding priests who are talented jazz musicians is a greater challenge, but in the case of British drummer Spike Wells the order of events is important. Ordained as a priest in 1996, Wells began his professional life in the 1960s, playing with artists including iconic saxophonists Tubby Hayes and Ronnie Scott. He's a fine and flexible player whose Reverence is the first album bearing his name on the marquis, but the company he keeps is equally significant.

Gwilym Simcock has, in the space of a few short years, emerged as the most significant young pianist on the British scene. Starting life as a classical pianist, he's come to jazz only recently. Still, in the space of a few short years—still in his early twenties—he's racked up a remarkable list of accomplishments. He played on saxophonist Tim Garland's ambitious If The Sea Replied (Sirocco, 2005), and with Garland and bassist Malcolm Creese in Acoustic Triangle, whose Resonance (Audio-B, 2005) is a sublime piece of chamber jazz. He's also a member, with Garland, of veteran drummer Bill Bruford's Earthworks. Combining a voraciously encyclopedic talent as a player with increasing significance as a writer, it's not too early to suggest he's only at the beginning of a long and fruitful career.

Creese is a bassist who may not dominate, but whose presence is always felt. Like Scott Colley, he has the remarkable ability to find precisely the right note, the right phrase, for every moment; and like Charlie Haden, he possesses a deep, woody tone that fills out this trio beautifully.

Reverence is largely standards-based, but one that distinguishes itself through unexpected takes of familiar songs, and interplay that allows for considerable interpretive freedom throughout. "My Funny Valentine begins uncharacteristically with a drum solo, and one that proves Wells to be a melodic and narrative-focused soloist. But it's when Creese and Simcock enter at a fast clip that this classic ballad takes on new life. A dark take on "You Don't Know What Love Is is more conventional in tempo, but Simcock's economy, Creese's dual role as time-keeper and melodist, and Wells' elastic time approach make it a dark-hued highlight.

Simcock's largely rubato "And Then She Was Gone combines romantic classicism with moments of vivid drama, and a definitive solo from Creese that's all the more for its stark simplicity. The entire album possesses a warmth and presence that's become a signature for Creese's audiophile Audio-B label.

While the occasional religious reference pops up, most notably on the positively hymnal "Dear Lord and Father of Mankind that closes the disc, the Reverence of the title is more broad-scoped than any specific denomination. It's a compellingly spiritual disc that can be appreciated by any who view music as a transcendent experience.

Falling in Love with Love; And Then She Was Gone; I Hear a Rhapsody; Alone Together; Emily; Secret Love; You Don