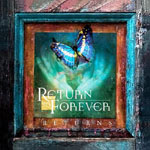 Seventies fusion supergroup Return to Forever's reunion and 2008 world tour was one of the year's biggest jazz events. At performances including its Ottawa International Jazz Festival show, the group did more than give a bunch of grays and no-hairs a chance to relive their youth. With a combination of prerequisite testosterone ("This is a man's band," said drummer Lenny White) and some updating to the material, the group proved that its music remains relevant. Returns—a two-CD set that documents a complete RTF performance with a couple of bonus tracks thrown in—documents the cathartic excitement of being there and makes clear that this music still stands on its own.

Returns is the live album that this classic RTF line-up—White, keyboardist Chick Corea, bassist Stanley Clarke and guitarist Al Di Meola—never released back in the day. With improvements in both instrument and recording technology, the group sounds better than it ever could have before. Grabbing some of the best material from the guitar-centric RTF's four album run—Hymn of the Seventh Galaxy (Polydor, 1973) through Romantic Warrior (Columbia, 1976)—it capitalizes on individual growth since that time, making this a far more versatile RTF.

Stretched to 38 minutes, the title track from Romantic Warrior includes solo features from Corea (which breaks, midway, into an unexpected, hard-swinging version of Miles Davis' "Solar"), Clarke (referencing some of his own '70s solo albums) and White (a powerhouse solo that segues smoothly back to the song). It's part of an unplugged middle section that also includes a stunning feature for Di Meola and a vibrant group take of the lyrical but thematically knotty title track from No Mystery (Polydor, 1975). Seventies RTF never sounded this good.

But it's the electric RTF that is remembered most, and Returns delivers plenty of high octane playing, especially on a 27-minute "Song to the Pharoah Kings," from Where Have I Known You Before (Polydor, 1974). Often criticized for being more style than substance, Di Meola dispels that perception once and for all throughout the set, even supplanting original RTF guitarist Bill Connors' iconic solo on "Hymn of the Seventh Galaxy." Still capable of light-speed finger work that leaves most in his wake, Di Meola has grown significantly since being recruited, at 19, to replace Connors. With greater harmonic sophistication and attention to space, he's the star of the show (among a group of stars) alongside Corea, whose meatier synth tones have never sounded better, adding a broader textural palette to the group.

The RTF reunion and vigorous performance of Returns say, in no uncertain terms, that high-energy fusion, with complex writing and muscular soloing, is back and relevant in a big way—and it's about time.