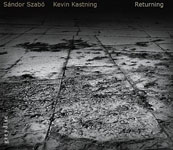 Returning is a rare album that is remarkable for its instruments as well as its instrumentalists. Guitarist Kevin Kastning brings some of his inventions, including the 12-string extended baritone guitar and 12-string alto guitar, into play once again, on this fourth duo disc with guitarist Sándor Szabó.

A stark immediacy is present on all ten tracks, and the desolate, grey surface on the album cover is reflected in the dark, searching quality within these performances. While the idea of duo guitar pieces might bring about the assumption that one musician solos while the other is relegated to a supporting role, things aren't quite that simple here. Foreground and background ideals still come into play, but both guitar parts mesh together to make this music both whole and wholly unique. Sometimes the music plays out like incidental—but not insignificant—music for a compelling desert drama; think of the 2006 movie Babel, as on "Point Of Entry." The recording quality here—superb throughout—allows every small gesture to resonate with significance, and the cleanly articulated lines from both players are always in perfect focus and balance.

Everything from Spanish-tinged sounds and vague Middle-Eastern influences to avant-garde twentieth century classical composition comes into play. Gothic—in the dark and unsure sense, but not the loud, metal-leaning music way—is a word that comes to mind in certain places. Single-note lines, whether rhythmic in nature or delivered in a floating, arrhythmic manner, are key here. The occasional brittle chords or plinking harmonics set off ideas of a certain order in one place, while drab hues are at the center of the musical color scheme at other times. Once or twice, the instruments evoke different sounds—like an occasional single-note sitar-sounding line, or a momentary harpsichord-like passage—but, for the most part, they retain their individualistic aural DNA throughout.

While it's hard to know whether to classify this as jazz, or what to call it at all, the debate is irrelevant. The skill involved in composing and carrying out this music on these particular axes is extraordinary, and the pictures painted are all one-of-a-kind. There's no need to waste time figuring out where composed material ends and improvisation begins. A better reason for a come back to Returning is to simply soak in the wondrous talents of these two guitarists.

About Kevin Kastning and Sándor Szabó