Lee Tomboulian and Circo: Return to Whenever 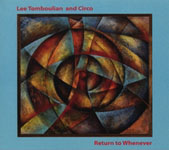 Pianist/accordionist Lee Tomboulian is the leader of Circo, an exciting ensemble that performs World jazz (Brazilian, Afro-Cuban and Uruguayan). Tomboulian first relocated the group from Arkansas to Dallas, and now to Appleton, Wisconsin, where he serves as a musical educator at the Lawrence University Conservatory of Music.

What makes a good portion of this album so diverting is its use of Brazilian and Brazilian-influenced music, sung by Elizabeth Tomboulian (nee Betty Elkins), who brings a lot of Luciana Souza-type vocalese to several tracks. On Toninho Horta's "Viver de Amor," her Portuguese sounds authentic and soothing. "Garota de Ipanema," more popularly known as the Jobim/deMoraes classic "The Girl From Ipanema," is slowed down to a surprisingly effective pace.

Another successful aspect of Return to Whenever is the work of Ricardo Bozas, a Uruguayan percussionist who previously worked with Brazilian singer/songwriter VinÃ-cius de Moraes. He is a virtual one-man band of percussive ideas.

Not as effective is Tamboulian's electronic noodling on keyboards. While he provides a backbone on "The Highway" with a "Viva Tirado"-type vamp on electronic keyboards, he uses similar instrumentation on other tracks that tend to be distracting.

Good music being hard enough to find is appreciated, though, and there's enough of it on Return to Whenever for repeat listens.

Title: Return to Whenever | Year Released: 2008 | Record Label: Self Produced