By Eyal Hareuveni
June 4, 2013
Sign in to view read count 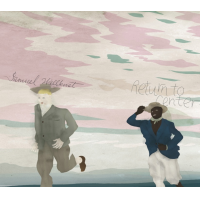 Return to Center is a detailed staging of a sonic meeting between man and machine. Swedish, Denmark-based guitarist Samuel Hällkvist, on his third solo album, contrast the digital exactness of MIDI programming with the human qualities and modes of expression that we traditionally associate with acoustic instruments. Thus Hällkvist and like-minded associates orchestrate a nuanced texture that bridges the natural timbre of acoustic instruments and inventive sonic manipulations and treatments that push the sonic envelope to new frontiers.

Hallkvist and his fellow musicians aim to transform and expand the sonic range and possibilities with electronics, manipulations and treatments to create a new sonic unity. On five tracks he employs a quartet comprised by him on guitars, bassist Johannes Burström, drummer Knut Finsrud, and Nils Berg on bass clarinet. These pieces are more reserved and sound like a futuristic, left-of-center quartet that questions the traditional role of each instrument within this band, and its respective role as creating an emphatic interplay. "Persona," for example, mixes a distant West-African guitar phrasing, contemplative clarinet playing, and redefines the musical spectrum of the rhythm section.

The more powerful and daring pieces are solos or duos with distinct improvisers. The solo pieces, as "Four And Return" and "Variety Of, 5-6" sound as musical segments prepared for a modern ballet troupe or for an abstract play, each offer a nuanced texture that calls for parallel dynamics on stage. Swedish drummer Morgan Ågren challenges Hallkvist through tight exchanges of ideas on "Chord." The two duets with close associate, drummer Pat Mastelotto, "Handshake, Hug" and "Helle Hollis," sound as draft for a prog-rock mini suites. Both explode with ideas, twists and dramatic tension. British trumpet player Yazz Ahmed's evocative phrasing adds a clearer storytelling narrative with a light Middle-Eastern touch. The pieces with Spanish vocalist and violinist Elena Setien succeed in offering an engaging exchange of inventive vocal and violin articulations with processed sounds that gently flirt between acoustic, manipulated and treated.

Hallkvist, as on his previous album Variety of loud (Boogie Post Recordings, 2012), manages to create fascinating textures that offer new possibilities for the musician and computer-machine.