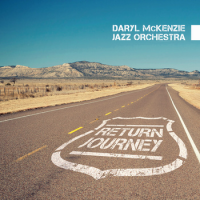 Return Journey, the fourth recording —and first in four years —by Daryl McKenzie's splendid Jazz Orchestra from Melbourne, Australia, was inspired in part by McKenzie's visit to the States in 2012 wherein he renewed ties with many of his onetime musical mates and colleagues and briefly returned "home" to the University of North Texas in Denton. One thing that sets the album apart from most other big-band enterprises is the fact that it is comprised entirely of bonzer original compositions (Australian for laudable), all of which were written by members of the ensemble.

Schmidli wrote the bluesy curtain-raiser, "A Good Hard Look," on which Hicks and trumpeter Vinnie Bourke (muted) share honors with the ensemble as a whole, and "The Stinger's Apprentice," a more tenacious theme whose ardent solos are by Davidson and electric bassist Kim May. Davidson composed the album's lone ballad, "New Beginnings," on which the orchestra's various sections again excel. This is yet another impressive album by McKenzie's intrepid ensemble, about which we wrote in a review of its first three, "If you appreciate fresh music that rests firmly on the bedrock of established big-band tradition, McKenzie's albums should put a smile on your face and a spring in your step." At its web site, the ensemble is applauded as "Melbourne's finest big band." No argument here, as it may in fact be Melbourne's only big band. If, however, there are other big bands in Melbourne, they'd have to be uncommonly talented to surpass this one.