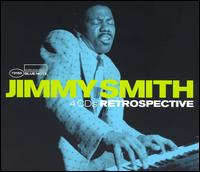 He might not have been the first jazz organist, but Jimmy Smith's place in jazz history as the first to modernize and popularize its use as a featured jazz instrument is secure. His innovative style created the sub-genre of organ jazz, which many have followed. When he died this past February at age 76, Smith was rejuvenating his career artistically; he was nominated as "best organist by the Jazz Journalist Association this year.

Released last fall, the four-CD Retrospective was part of the Smith renaissance, but since his passing, it stands as a tribute to his early career and the formation of his sound. As with any broad compilation, devotees will argue over the omission (or inclusion) of particular tracks, but the songs collected here provide an overview of Smith's important early work. Drawn mostly from his initial stint at Blue Note Records in the late '50s and early '60s, and presented chronologically, the four-plus hours of music offer the chance to listen to Smith's evolution unfold.

Opening the set are Smith's tunes "You Get 'Cha and "Judo Mambo, set against his versions of Horace Silver's "The Preacher and Dizzy Gillespie's "The Champ, all arranged for his trio of organ, guitar, and drums, which remained the backbone of his music. Smith's playing the bass lines from the organ pedals—even at fast tempos—rounds out the trio's sound and illuminates his considerable technique and personal style.

"Groovy Date finds Smith embroidering his trio with the addition of horns for a sextet reading of the tune and introduces saxophonist Lou Donaldson, who is also featured on a grooving version of Bird's "Yardbird Suite. Additional highlights include "The Duel, a romp between Smith and drummer Art Blakey; the mining of a groove for twenty minutes on the classic "The Sermon, also with Blakey and horns; an inspired take on "See See Rider; and the greasy feel of Smith's hit "Back at the Chicken Shack.

Retrospective is a solid introduction to Smith's work. Hopefully, fans of those who've followed in his wake, such as Joey DeFrancesco and MMW, will take an interest in hearing where it started.