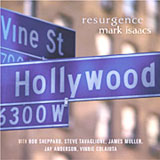 Australian pianist and composer Mark Isaacs has done more than most any other jazz musician to seal the fault line between serious modern jazz improvisation and "contemporary jazz or "adult oriented jazz. I tend to classify the former as the jazz father's and earlier genre traditionalists (bebop, hard bop, modal) and the latter as well-behaved, unobtrusive music made by nameless popular performers, selling millions of copies.

Isaacs, with every release, has refined his systematic approach to post-modernity jazz to the point that his sound defines what jazz should sound like at the advent of the 21st Century in the same way Joe King Oliver, Satch, and Bix defined New Orleans/Chicago, Basie and Ellington defined the swing era, Charlie Parker and Dizzy Gillespie defined be bop and Miles Davis defined everything else.

Resurgence is Isaacs seventeenth release as a leader, his most recent releases being Visions (Vorticity, 2006), Keeping the Standards (Vorticity, 2004), and Closer (Naxos Jazz, 2000). Isaacs has a purely modern musical sensibility that incorporates a myriad of jazz styles and regional genera. Resurgence is a hook-filled creature that will have the listener humming Isaacs' well-crafted melodies from the first listen.

In particular are "Waltz for Melanie, which should remind the listener of Bill Evans' "Waltz for Debby updated; Bob Sheppard's soprano saxophone melds well with James Muller's lyrical/rhythmic soloing; and "Affectionately Yours is a true sing-along with Sheppard on tenor this time. Isaacs is an egalitarian band leader who allows everyone plenty of solo space, including himself, which he takes full advantage of. The finest piece among fine pieces on Resurgence is the gospel closer, "Heal Thyself. The piece begins with a barrel-house guitar riff that leads into a jaunty, complex head led by Sheppard on tenor. Muller's guitar solo is the best of his on the disc as is Isaacs'. This one made my end-of-the-year-list.