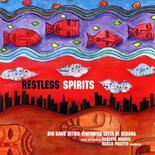 Even if pianist and composer Roberto Magris could have performed Restless Spirits with a small ensemble, he probably would not have done so. Here is the conundrum: might Magris have created this music in a large ensemble because he intended it to reflect a secret narrative that ponders the journey of the soul? The trick is to follow the sequence of the repertoire. This is a musical suite, which could very well have been cleverly developed to mirror that dramatic journey of the "restless spirits" moving with wafting, changing rhythms—body and soul—in search of inner peace. Magris might surely have taken a leaf from some epic Latin poetry.

Consider how this group of nine pieces is set in a carefully determined sequence; almost a mirror of the journey of the soul in Dante Aligheieri's classic 13th epic poem of eternal human exodus, The Divine Comedy. The journey takes souls and spirits through Purgatory and into Paradise.

Therefore, the key is to succumb to the charms of the music and give in to its narrative. This is beautifully written and arranged, and constitutes a deeply profound meditative journey. Magris has cast the story in a modern context—or at least one where the idioms of jazz will allow some license. For instance, in the introduction, the music begins with a track called "African Moods." Here is a not-so-oblique reference to the cradle of civilization; the Great Rift Valley described by African historian Cheika Anta Diop. The music follows a babble-and-rumble opening, like Charles Mingus "Pithecanthropus Erectus," to a state of equanimity. The story unfolds with rambunctious percussion and ritualistic chants; then the movement gives over to the glorious bleating narrative of Giordano Bruno Tedeschi's trombone.

Magris leads the extraordinary 48-piece Big Band Ritmo Sinfonica Citta di Verona into the next, softer episodes in a masterful, modal command of the ebony and ivory keys. "Blues for My Sleeping Baby" and "Peaceful Heart" are pieces of a kind, which make brilliant use of the timbral values of brass, woodwinds and limited strings. The low end of the tonal spectrum defines the grave stakes, with a harmonic excursion from Giuseppe Gasparini's electric bass intro into "Peaceful Heart."

Magris expresses human despair commandingly, with timeless pulse and amorphous tone in "Ambiguous" and "Restless Spirits." It appears a stroke of genius on the part of Magris in his use of the Fender Rhodes for the former track, as he manipulates pitch to suggest turmoil and create the attendant feelings of upheaval and fear. "Restless Spirits" begins atonally against the backdrop of a raging ensemble, and then settles somewhat after the piece reaches a tonal plateau.

Moreover, there is complete resolution in the following parts of the suite—"Short and Shorter," perhaps a puckish comment on the relative insignificance of artistic endeavor, through "Standard Life" and a return to the mythical paradise in the African landscape with "Mali Blues." "Ambiguous," repeated with denser arrangements, fills in for a dramatic coda.

This is an inspired work from a thoughtful musician.