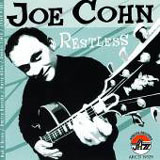 There are jazz musicians who haplessly attempt to reinvent themselves with every passing fad and then there are those, like guitarist Joe Cohn, who diligently progress their art with integrity and conviction. A mainstay on the New York scene, Cohn consistently delivers with a nod to the past and an intensity full of forward motion. Restless is no exception. The guitarist is at the top of his game and the disc has the feel of a late-night jam session where everyone involved gets ample opportunity to stretch out.

Cohn dispenses every phrase of every solo with vibrancy and mastery of conception. His style is rooted in the classic sounds of Barney Kessel, Tal Farlow and Kenny Burrell, however his approach is void of imitation and maintained with warmth and personality. The guitarist's seemingly effortless, horn-like weaving of ideas on "Too Marvelous for Words and "Comes Love stands out as exceptional.

Saxophonist's Dmitry Baevsky and Harry Allen share the solo spotlight equally with Cohn. Like Cohn, both horn men are adept in the language of swing and bebop. Baevsky's alto tears through Thad Jones' "Little Juicy and Allen dominates with his brawny tenor tone on the title track.

The inclusion of two tunes from the pen of Cohn's father, the late Al Cohn, pays tribute to the legacy of the oft-forgotten tenor saxophone giant. The up tempo burner, simply titled "Fast, is contrasted nicely with the minor-key stroll of "Woody's Lament.

With well-chosen repertoire and on-the-money performances, Cohn and company deliver a robust, high-spirited session. Restless stands out as a first-rate effort from one of jazz's most underrated guitarists.