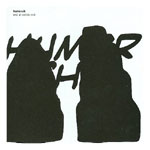 It's difficult to know, with the increasingly common integration of electronics and processing with acoustic instrumentation—and, furthermore, their expanding use as primary musical sources—if it's actually more accessible or if the ears are simply acclimatizing. Regardless, Humcrush's Rest at Worlds End is a testament to percussionist Thomas Strønen and keyboardist Ståle Storløkken's ability to create improvised pieces of often unexpected form and heightened beauty, all the while exploring the otherworldly soundscapes that make Humcrush another fine sonic innovator alongside Supersilent (of which Storløkken is a charter member) and Food (one of Strønen's many projects), despite remaining distinctly uncommon in approach.

Rest at Worlds End is the duo's third release, following its 2004 self-titled debut and 2006 follow- up, Hornswaggle, both also on the intrepid Rune Grammofon label. Recorded live from a series of dates across Norway, the music can still be jarring, as it is on the opening "Stream," where Strønen's elastic time-keeping provides an anchor for Storløkken's jagged textures, although by the three-minute song's end there's a recognizable groove, even as Strønen's high energy interplay keeps things slightly off-kilter.

How groups evolve can be a curious thing, especially when initially intended as a one-time event. Humcrush continues to draw references from near and far, a confluence of everything from Joe Zawinul's keyboard orchestrations—something Storløkken explores to even greater effect with his band Elephant9 and its promising debut, Dodovoodoo (Rune Grammofon, 2008)—to Sextant- era Herbie Hancock, trumpeter Jon Hassell's joining of the cerebral and the sensual and, of course, their own fearless experimentation in other projects. But where Rest at Worlds End distinguishes itself from the duo's previous releases is greater attention to melody, rhythms that may not be propulsive, but are pervasive nevertheless. The title track is a gently moving piece driven by Strønen's soft percussion and Storløkken's keen sense of when to move things from consonant to dissonant, all the while playing with such attention to space that the track virtually floats on by over the course of six minutes.

There are plenty of lyrical moments on Humcrush's first two discs, but there are far more constructs of unadulterated beauty—despite the duo's often quite alien landscapes. On "Audio Hydraulic," Strønen's astute combination of electric and acoustic percussion creates a percolating pulse that allows Storløkken the freedom to choose from soft colors to occasionally busier melodies. The overall ambience of the disc is soft and tranquil, but there are occasional bursts of energy, including the vibrantly percussion-driven "Steam," where Strønen's collection of conventional and unorthodox instrumentation becomes the track's most defining characteristic.

While there's little to link the music of Humcrush with conventional jazz, its clear improvisational nature and references to sources more closely affiliated keep it within the overall spectrum, albeit hovering at its most outer reaches. Still, as labels become increasingly meaningless, Strønen and Strønen are finding new ways to push the envelope. The largely easy-on-the-ears Rest at Worlds End is a terrific entry point to the world of Norwegian improvised music, where barriers are regularly being deconstructed and borders effortlessly dissolved.