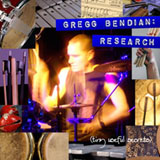 All-percussion ensemble albums are rare in any genre. Still, by digging deep, it's possible to find exceptional discs like Swiss percussionist Pierre Favre's Singing Drums (ECM, 1984) and, more recently, The New Percussion Group of Amsterdam's Go Between (Summerfold, 2007), proving that percussion needn't be just about the rhythm.

Solo percussion albums are even less common. The chameleon-like Gregg Bendian—who can just as easily be found performing left-of-center form and function with his Interzone group as propelling his Mahavishnu Project through a remarkable performance of guitar icon John McLaughlin's Visions of the Emerald Beyond (Columbia/Legacy, 1975) on the live Return to the Emerald Beyond (Cuneiform, 2007)—has already released one solo percussion disc, Definite Pitch (Aggregate Music, 1994). But whereas Definite Pitch was a studio recording that largely utilized tuned percussion instruments including vibraphone, marimba, chimes and chromatic boobams, Research is culled from a series of live performances in Europe, Los Angeles and New York over a ten-year period, and focuses more extensively on untuned instruments.

While untuned percussion is a commonly used term to define many of Research's instruments, including conventional and prepared drum sets, crotales and bongos, in truth it's not a particularly appropriate description, as even snare drums, tom-toms and bongos can be tuned to specific notes, turning them into instruments capable of melody. Still, despite tracks like "Danbury," featuring richly resonating bowed vibraphone and chiming glockenspiel, the primary thrust of Research is rhythmic, with "One Million, for Max Roach" a focused, jazz-centric drum solo that pays tribute to the late drum legend. But even there and on "For Steve McCall, My Teacher & Friend," which explores the possibilities of a single snare drum over the course of six minutes, there are unmistakable elements of thematic—melodic, even—content; not to mention innovative sounds rarely, if ever, associated with these instruments.

Bendian possesses an all-consuming interest in music, ranging from 20th Century classical ("Crosshatching, for Iannis Xenakis," which uses extended techniques to draw a surprising variety of sounds from two bongo drums, and "Billowing Segments, for Edgard Varèse" where, in Bendian's hands, drum set becomes orchestra) to avant-garde ("Japan, for Alex Cline," utilizing, like its dedicatee, a greatly augmented drum set) and jazz (the angular, marimba-driven "Red Nova, for Red Norvo," where the link to its Swing Era namesake certainly feels tenuous).

The sequencing of tracks on any album is a key concern, but with an album as conceptually off-putting as a solo percussion album (sadly) is, the order of events is even more critical. Bendian deftly intersperses the rhythmic with the textural and the clearly melodic with the less overtly so, shaping a 76-minute program that's surprisingly approachable despite its many challenges. Research may reflect Bendian's ever-searching, ever-evolving approach to music, but it's also a complete, self-contained statement that, though not appearing to be for the faint-of-heart on the surface, yields unexpected rewards for those brave enough to pay attention.