By Matt Cibula
December 2, 2005
Sign in to view read count 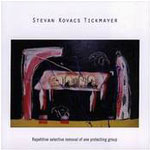 I have no idea what's going on here, but I kind of like it.

Steven Kovacs Tickmayer is a Hungarian multi-instrumentalist and composer from Yugoslavia who now lives in France, but mostly he appears to be a musical provocateur. This album features 21 short, weird pieces that combine jazz, avant-classical, ambient, rock, and electronic musics, jumbled all up together so that you can't tell what you are hearing. Some of it is old (Tickmayer was a founder of Science Group), most of it is new, all of it is out-as-hell.

One might think this would be a prescription for disaster, but that's not the case. It's actually pretty damned great in its own way. "Differential Motivation" is emblematic: it combines bebop walking bass figures, Eno-like quasi-Afrobeat guitar, shuffling, stuttering percussion explosions, wild battalions of organs that turn into accordions, shattering glass, and violins deployed like saws. It's a mess, to be sure, but a mess with a purpose; it never loses the frenetic beat, it never gets old (the advantage of a 1:59 running time), and it's creative and fun.

See, fun creativity is what can turn boring old assembly-line avant-jazz into great, wonderful, bizarre listening. The track called "Orderliness" makes its title sound like a lie, with continual breakdowns of its crazed flailing beat and impossibly fast multitracked synth pulses, until you realize how much work must have gone into every second of it, and how orderly it all is after all, and how "order" itself is massively important and massively overrated at the same time. It's a brisk two minutes in this universe, and then we're off into the John Zorn / Kronos Quartet / Husker Du / P-Funk mashup that is "Genetic Lottery." It's impossible, but it's adorable, but it's chaotic and hard to listen to, but you just can't stop listening to it anyway.

The drones are harder to deal with than the pileups, but the best pieces—like the drum-n-bass plus Steve Reich times death metal equals hilarity of "Deprotection—are the ones that go fast and end up in five different blind alleys at once. The most "serious" piece is a doom-und-grind thing called "Our Framework of Apocalypse," which is made up of two unpleasant screechy movements and one cute sci-fi one. I think Tickmayer is better when he sticks to fragments, though.

It occurs to me that I haven't described the music very precisely. Well, that's on purpose. If this review hasn't set you screaming back to your precious Bix 78s yet, then try to give Tickmayer a shot. You won't believe what you're hearing, and that will be a good thing.