BY JIM SANTELLA
January 8, 2007
Sign in to view read count 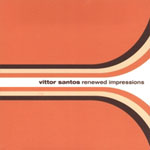 A strong jazz trombonist can thrill any audience through his tone, technique, and creative powers. Over the years, however, we've heard some who just don't make the grade, either through poor tone quality, sloppy technique or lack of imagination. Others, such as J.J. Johnson, Frank Rosolino, Wycliffe Gordon and Bill Watrous (just to name a few), have given us prime examples of what the instrument can do for modern jazz.

Vittor Santos represents the epitome of a jazz trombone player. He's got all the elements in their proper place, and he's quite free with his delivery, too. It seems to come from the heart as he fills each selection with a warm balance of buttery tone and impeccable technique. Free to create among friends, he's having fun.

The Brazilian musical sounds on Renewed Impressions come from the folk tradition. There's a bit of the dance in some of the album's selections, but the band members improvise their solo sections within the jazz tradition. Acoustic bass, mandolin, guitar and piano each take their turns in the spotlight with considerable pleasure. The samba beat that Santos has woven through his program keeps things moving comfortably.

However, it's the trombone's lovely voice that stands out here so eloquently. With Renewed Impressions, Santos offers an enjoyable Brazilian program that sparkles with the kind of jazz authenticity that lasts forever.

Luanne; An American in the Samba; Everlasting Warmth of Fellowship; London Samba; I Just Remembered Everything; A Trombone on Tereza Street; Etienne and Margot; The Moving Water.