By Steve Bryant
January 7, 2013
Sign in to view read count 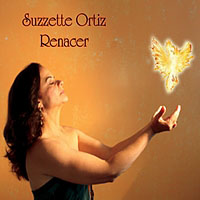 There are a lot of jazz players out there who for gotten tired of waiting for some label to record them and take decided to do it themselves. Philadelphia's Suzzette Ortiz, who has been laboring in the trenches for the past two decades, took it upon herself to record her own music. The Puerto Rican-born pianist came to Philly to study music, and racked up some heavy duty credentials along the way. She studied choral conducting at Julliard and Temple, took an apprenticeship in piano with the legendary César "Pupy" Pedroso , of Los Van Van fame, and studied vocal improvisation with Bobby McFerrin. During this period, Ortiz took a day gig with the Camden Schools and managed to produce a chorale which has won awards all over the world. In the evenings Ortiz performed with the seminal female Latin-jazz group Ellas, and even garnered four Latin Grammy nominations with Philadelphia salsa group Orquesta La Paz.

Ortiz's debut Renacer (Rebirth) is a culmination of her musical training and experiences. The result is a joyful mix of Afro-Rican and Brazilian rhythms, melodic instrumentals, and ethereal vocals. The opening "There Is Something About You" is a stirring blend of instrumental and vocals which bring to mind singer Tania Maria in her heyday. "La Bahia Fosforecente" (Bio-luminescent Bay) follows, a reference to Puerto Rico's La Parguera. What makes this interesting is the mix of music, chorale and even a poetic contribution by one of Ortiz's students.

After a piano interlude on "Recuerdos," Ortiz celebrates fiesta on "Ponce," which starts off with the sound of the coqui (tree-frog) and jumps off into bomba/plena rhythms, which are enhanced by Eubie Nieves' rousing flute solo and a swinging turn on cuatro by Tony Perez. After a canto to the Yoruba orisha Yemaya, "A Joyful Transition," Ortiz ventures off into Cuban territory on "A Mis Amigos," where she lays down some mean tumbao over a songo/timba beat (shades of Pedroso). She follows this up with some serious Afro-Cuban swing on "Jimmy a Every Which a Way," a tribute to her other mentor, pianist Jimmy Amadei. What makes this tune pop is some serious mambo violin by Katherine Boydand the great John Blake, which goes into straight-up timba by Ortiz.

Renacer is an auspicious entrée by Ortiz, who is a triple threat as a pianist, vocalist and arranger. It is important to note that she created all of the vocals here, as well as the string arrangements, and her talent is apparent all through the album. Renacer shows that Ortiz had over 20 years of pent-up musical energy and ideas that she has now unleashed upon the jazz world. Hopefully she has enough in reserve for some impressive sequels.

There Is Something About You; El Perro de San Geronimo; La Bahia Fosforecente; Recuerdos; Ponce; Joyful Transition; A Mis Amigos; Jimmy A Every Which A Way; Renacer.