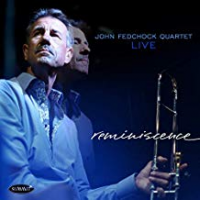 After recording his quartet's splendid album Fluidity (Summit Records 2015), trombonist John Fedchock realized he had enough unused material in hand from that delightful concert date to consider releasing a second album. The more he listened to the music that hadn't made the cut on Fluidity, the more Fedchock was convinced that a second album not only could but should be produced comprising half a dozen songs that for various reasons weren't included on the earlier recording. "In some instances," he writes, "the music was newer material, and in other cases it was just informal blowing tunes to give the group a chance to play without the pressure of any agenda." Even though the unused music was first-rate, Fedchock realized it wasn't quite enough to encompass a full CD, so he "borrowed" a seventh number ("Brazilian Fantasy") performed a year before at the same Virginia Beach, VA, nightclub with the same personnel save for drummer Billy Williams who replaced the always-dependable Dave Ratajczak.

Speaking of Ratajczak, he was Fedchock's timekeeper of choice for more than thirty-five years, and this concert in August 2013 was one of his last gigs before his untimely passing the following October from ocular melanoma. To assert that Ratajczak never sounded better would be gratuitous, as he always sounded ready, earnest and unerring. Here he anchors a rhythm section whose other members are pianist John Toomey and bassist Jimmy Masters. Working together, they lend Fedchock all the support he needs. That is no less true of Williams who turns up the heat with brushes and sticks on the vigorous "Brazilian Fantasy."

The ensemble opens Reminiscence with "The Third Degree," a sunny swinger written by Fedchock for his New York Big Band and pared down to quartet size by the composer. Fedchock is in fine form here, as he is throughout, framing a buoyant solo that Toomey follows with another in the same vein before the duo exchange fours and eights with Ratajczak. "Loose Change" swings equally hard, albeit at a more moderate tempo, after which Fedchock shows his mastery of the ballad form on J.J. Johnson's dreamy "Lament." "The End of a Love Affair" cooks from end to end (enhanced by more excellent drumming from Ratajczak), while another standard, "You're My Everything," espouses a shuffling groove that leads to a second ballad, Tadd Dameron's even-tempered "If You Could See Me Now." "Brazilian Fantasy" rings down the curtain on another broad and persuasive concert by the superb John Fedchock Quartet.

The Third Degree; Loose Change; Lament; The End of a Love Affair; You’re My Everything; If You Could See Me Now; Brazilian Fantasy.