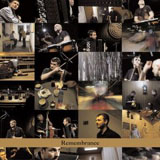 This month, Krakow, Poland plays host to the world's top klezmer musicians as they take part in the city's 17th Jewish Cultural Festival. That a celebratory event of this magnitude occurs in a city that, prior to the Holocaust, was home to one of the most important Jewish cultural centers in Europe is evidence of this music's continued vitality. While much of klezmer's recent revival and consequent fruitful relationship with creative jazz has been fueled in the United States, bands from Eastern Europe, where the music itself originated, have contributed in their own special way.

For the past ten years, accordionist Jaroslaw Bester and the Cracow Klezmer Band have been the premiere Poland-based klezmer/jazz ensemble. As the title implies, Remembrance is a look backward at the band's history and as members have moved on to other projects, a parting token of appreciation to their fans.

For people who have knowledge of the band's previous Tzadik releases, the songs will be familiar as will the dark rich sound and stunning musicianship. For those that don't, this live performance from 2005 offers a broad sampling of their repertoire that, while heavy on pathos, beautifully conveys klezmer's mixture of laughter and tears. Bester and Oleg Dyyak each use large Russian "bayan -type accordions that produce a strikingly pure tone, especially in the lower registers.

Dyyak also is a percussionist and clarinetist and combined with Jaroslaw Tyrala's violin and Wojciech Front's bass, the group achieves a classically precise chamber feel that showcases elegant melodies and arrangements in the context of an exciting delivery for a thrilling performance. This last offering from the Cracow Klezmer Band serves as a fitting Remembrance to a group who played a pivotal role in the emergence of a newly vitalized Jewish music.

Recollections Of The Past; The Migration Of Souls; Memento Mori; The Tree Of Life; Klezmer Rhapsody; The Prayer; Awaiting; The Colours Of The Heavens; A Devilish Tale.