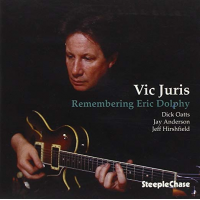 As a significant statement of its own by guitarist Vic Juris and his sympathetic ensemble, Remembering Eric Dolphy is an undeniable success. As the tribute affair its title suggests it proves to be far more illusive. For one thing, out of the ten selections only four happen to be Dolphy originals, while the rest are new compositions by Juris and reedman Dick Oatts. Although you can interpret the next point in two ways, it seems that the instrumentation is a bit unusual in that Dolphy never recorded with a guitarist. Still, Juris’ gumption for tackling this project and doing so in such an idiosyncratic manner is nothing to sneeze at.

All of the foregoing aside, Juris’ writing is exceptionally strong throughout, touching on many moods. The catchiest of the lot are “Latin’s Lamp” and “He Me,” with the former not unlike Berlin’s “Remember” (is there some connection there to the album’s title?) and the latter making leaps towards some “giant steps” before changing directions. As for the Dolphy tunes, “South St. Exit” is probably the most unforgettable due to Oatt’s flute work and one ends up wishing his burnished tone on that instrument was heard from more than just on this one track.

Juris’ guitar sound is strikingly similar to that of John Abercrombie. He arrives at a processed tone that on more than one occasion puts me in mind of such Abercrombie ECM sides as “Getting There” and “Current Events.” As for the rest of the crew, hats off to Oatts for not attempting to imitate Dolphy in any way and accolades to bassist Jay Anderson and drummer Jeff Hirshfield for being so responsive to the character of each composition. So once again, I’m not sure how well this works as a Dolphy homage but I am sure that this is one of Juris’ best records to date.