By EDWARD BLANCO
January 27, 2013
Sign in to view read count 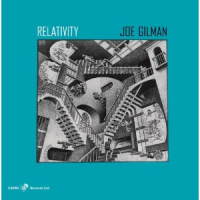 The concept of interpreting art and other visual works into a piece of music, is probably not an easy thing to realize, yet on Americanvas (Capri, 2010), pianist Joe Gilman successfully accomplished this feat, drawing his inspiration from the art world using paintings as vehicles for jazz improvisation. Relativity follows the same theme, this time focusing on the works of Dutch graphic artist Maurtis Cornelis Escher better known as M.C. Escher where Dr. Gilman, music Director of the Brubeck Institute's Fellowship Program, offers eleven original compositions for this concept recording.

Saxophonist Chad Lefkowitz-Brown and trumpeter Nick Frenay play pronounced roles in a brilliant quintet that fires on all cylinders evident right from the opening salvo "Three Spheres." Escher's 1961 lithograph "Waterfall" serves as the inspiration for the lighter mid-tempo piece of the same name featuring Gilman's handy work. The beautiful "Three Worlds" possesses a darker yet simpler texture, showcasing the pianist in a softer mode with drummer Corey Fonville providing the accompaniment. In stark contrast, "Smaller and Smaller" comes out in steamy fashion, one of the disc's better burners.

Bassist Zachary Brown's strong chords introduce "Encounter," perhaps the set's departure tune as it's funky and even bluesy style distinguishes it from the other themed tunes. Gilman returns to the core of the project with another balladic piece, sharing the stage with Frenay's flugelhorn voice and the drummer's crashing cymbal accents with the graceful "Snow." The unquestioned center-piece of the album is the melody-rich "Day and Night" complete with brisk solos and a warm Brazilian flair carrying the day.

"Sky and Water" and "Ascending and Descending" round out the set, leaving an impression that's relatively easy to ascertain: musical scores of a challenging, entertaining and enjoyable nature. Relativity marks another successful musical interpretation of another art form, something in which Gilman is becoming more prolific. What jazz melodies Gilman might pen from the inspiration of Roman, Gothic or even ancient Greek sculptures?