BY DAN MCCLENAGHAN
August 17, 2006
Sign in to view read count 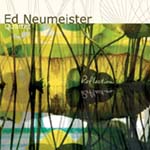 After twenty years in New York, trombonist Ed Neumeister went expatriate in 1999, moving his family to Vienna, Austria; he now holds the position of Professor of Trombone studies at the University of Music and Dramatic Arts in Granz, Austria. A veteran of many top big bands led by Duke Ellington Orchestra, Lionel Hampton, Buddy Rich and others, he also earned a Grammy nomination for his arrangement of "A Nightingale Sang in Berkeley Square" in 1992, and he's worked as a freelance trombonist for numerous philharmonic and symphony orchestras.

Despite all those accomplishments, two of his bandmates on Reflection—bassist Drew Gress and drummer John Hollenbeck—can claim higher profiles. Pianist Fritz Pauer rounds out the quartet, which showcases some gorgeously facile group interplay.

The quartet's equilibrium is remarkable. A trombone has the ability to blow in the direction of bombast and brassy volume, but Ed Neumeister's group sounds almost chamber-like in its equality, with each touch of the cymbal ringing clear, each plucked bass note throbbing distinctly. Neumeister—the composer and player—is a master of subtlety and finesse on open or muted horn, and Pauer adds splashes of swirling bright colors with masterful aplomb.

Five of the eight tunes here are Neumeister originals, along with one piece each from Hollenbeck, Gress and Pauer. Things get "jazzy" at times, as on the Neumeister-penned "Osmosis," where the trombone sits in a more up-front position; but for the most part, this is thoughtful, erudite music—democratic music, relentlessly beautiful sounds that seem almost suite-like in their interconnectedness.

Reflection shines a very deserved spotlight on a lesser-known talent.