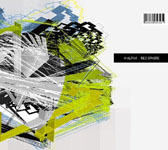 Best known as trumpeter Steven Bernstein's sparring partner in Sexmob and for his ongoing collaborations with keyboardist Wayne Horvitz, Krauss released a string of well-regarded CDs on Knitting Factory Works in the mid-to-late '90s. Since then, he's done a series of self-released, limited- edition electro-acoustic recordings dedicated to different visual artists. Red Sphere represents something of a return for Krauss as a leader, blending his improvisatory and electro-acoustic interests.

H-Alpha's non-idiomatic approach doesn't retreat to easily identifiable forms or styles, the open format pushing the musicians to draw from their wide sonic palettes. Despite the rapid exchange of ideas, a steady barrage of notes is avoided, leaving space for sounds to develop and decay. The sole melodic voice, Krauss deftly shapes pieces, altering his attack to include spitting incendiary lines, sputtered sock-muted phrases and circular-breathed sustained drones.

Ranging from less than 1 to more than 8 minutes, the 17 tracks roughly alternate between harder-edged burners and spacious soundscapes, but each is imbued with identity to avoid repetition. Mori's trickling water sounds color Krauss' prolonged tones for an icy ambience on "Alpha Centauri." The mood is shattered when "Barnard's Star" erupts in a blast of squawking sax and frenetic drums. Watery effects and Krauss' growling horn open "Lalande 21185." After Black punctuates the utterances, Mori introduces a repeated shimmering phrase that he locks into, establishing a plodding groove for Krauss' dirge-like yowls.

Mori conjures an air of mystery on "V1216 Sagittarii," as Krauss' kazoo-like burbling and later sustained tones add to the sense of foreboding, while it's often difficult to discern the sound sources on the ghostly "EZ Aquarii." Black's big beat prods Krauss' intensity and Mori's sonority on "Lacaille 9352," while his tribal-tom riffing plays off the repeated sax phrase that introduces "61 Cygni."

The astronomic titling is apt for the otherworldly sounds and textures. Krauss and his partners share similar sensibilities, seeking to transcend established conventions through disciplined improvisation.