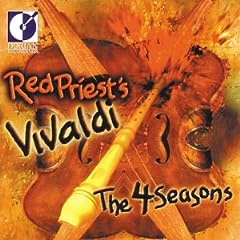 Red Priest is a group of very intelligent period instrument specialists with a red-hot wicked sense of humor.? After the release of the group's two previous recordings, Priest on the Run and Nightmare in Venice , the group went on tour with what was touted as their highly controversial interpretation of Vivaldi's first four concertos from his Il Cimento dell' Armenia e dell'invenzione (The trial of harmony and invention), opus 8. As a sub-collection, these concertos are known collectively as Le Quattro Stagioni (The Four Seasons).

Previously, I would have cited Il Giardino Armonico's Teldec performance as the most envelope-pushing interpretation.? This performance was per Hoyle as compared to Piers Adams' arrangement of the work.? However, the Il Giardino Armonico version was performed with a period instrument harshness that I found profoundly refreshing. It was with this high expectation that I approached the Red Priest recording. Needless to say, Red Priest vastly exceeded my expectations.

The Four Seasons were written as violin concertos.? In Red Priest, the virtuoso violin parts are purloined by the crafty Adams, who leaves the pieces' foundation to his rhythm section of violinist Julia Bishop, cellist Angela East and harpsichordist Howard Beach. A virtuoso Piers Adams is.? Micala Petri was forever the reigning queen of recorder performance for many years.? I suspect that a case could be made for her to still be if one restricts their consideration to "straight" interpretations of the baroque canon. But, my vote now goes to Piers Adams, who irreverently and intelligently, deconstructs these war horses and provides the listener and experience as fresh as a spring strawberry bursting on the roof of your mouth.

The tempo is frantic, the cuckoos cuckoo, birds chirping, wind blowing, ice breaking.? It is all here captured is graphic detail. Corelli's Christmas Concerto is more of the same but a bit tamer. A warning to Vivaldi purists (particularly of the modern instrument ilk): this is not a disc for you. You will not find these treatments funny or entertaining at all. But for those listeners with aware open minds, who have something greater than a passing familiarity with these pieces. Red Priest's Four Seasons is not for the uninitiated, only for the informed, and the informed with a bit of a willing suspension of disbelief. A splendid baroque gift that will be praised as visionary and heretical in the same breath... Good show!