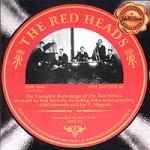 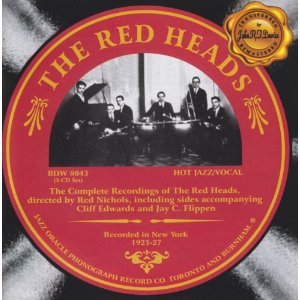 If you play on your own terms for small audiences without any recognition, you're a hero; if you do it while earning a steady paycheck and selling plenty of records, you're a sell-out. Or so it might seem for Ernest Loring "Red" Nichols (1905-1965): trumpeter, composer, bandleader, polarizing figure in American music and possibly the most well employed musician of the Jazz Age.

Red Nichols' impeccable musicianship and keen business sense kept him working consistently in the theater, studio and on radio from the start of his career. At the same time his commercial success and singular style have made him a controversial figure, with many critics unwilling to acknowledge him as anything more than a mere popular musician. Nichols was rarely out of work, often leading the same personnel, and even playing the same tunes, under different names for different labels. While some may see his vast recorded output as the work of an opportunistic self-promoter, the records themselves reveal a technically assured musician attempting to say something musically unique, even if he was also trying to pay the rent.

As his Red Heads sessions demonstrate, Nichols was more than willing to channel his creativity through the popular styles of the day. Many of these sides feature dated (to modern ears) vocals from popular crooners of the time, most often Cliff "Ukulele Ike" Edwards (a.k.a. Jiminy Cricket of Disney's "Pinocchio"). Yet Nichols and his partners invigorate even the most banal pop ditty through engaging ensembles and scrappy solos.

"Poor Papa," an otherwise forgettable stick of Jazz Age bubble gum, gives us an idea of Nichols's approach to a pop song: a harmonically arresting introduction is followed by a tightly woven collective improvisation, setting up for a clarinet solo over simmering cymbals and upbeat piano punctuations. After a peppy interlude and nasal vocal, Nichols's powerful trumpet (heard to telling effect even on tinny acoustic surfaces) drives the band home to a smartly executed coda. Nichols' style and imagination energize most of these otherwise trite songs, with a few purely commercial recordings included for the sake of completists. The percolating "Sweet Child" features Miff Mole's flip, facile trombone, and on "Five Foot Two, Eyes of Blue" Nichols crafts a witty solo commentary out of the 1920s anthem. "You Should See My Tootsie" shows off pianist Arthur Schutt and drummer Vic Berton locking in with playful counterpoint behind a cornball vocal, before Jimmy Dorsey's silvery alto sax adds measured cool to the atmosphere.

As these sessions also demonstrate, the Nichols style stands apart from the rhythmically aggressive, vocally inflected African American sounds of the time that influenced many white players and the course of jazz history. Harmonic subtlety, thematic variety and emotional detachment characterize Nichols band book originals such as "The Hurricane" and "Nervous Charlie." When the group strips down to trumpet/piano/drums for "Plenty Off Center," they offer a confident, clearly defined arrangement of several angular themes rather than an organic trio. "A Good Man is Hard to Find" finds the Red Heads spinning spirited yet thoughtful statements over a leisurely skipping beat. More inspired by European conservatories than New Orleans nightclubs, The Red Heads give the impression of a late 1920s "cool" school, especially daring at a time when "hot" and "jazz" were rarely separable.

Even more surprising is the Red Heads' approach to tunes associated with influential African American artists, such as Jelly Roll Morton's "Black Bottom Stomp" or Louis Armstrong's "Heebie Jeebies." The visceral drive and spontaneity of the more famous versions are replaced with an introverted, coordinated elegance. The Red Heads' softer attack and transparent lines gives these works a "chamber jazz" feel that is more restrained but just as sincere. Rather than stamping these recordings as the "white" versions of well-known classics, it's helpful to hear them as the work of intelligent, sensitive musicians making the material their own; as a definition of jazz, we could do a lot worse.

While early jazz aficionados will find ample historical interest here, curious listeners looking to explore the roads jazz did not take, or our hallowed American art music's early trysts with pop music, might find this set interesting. Alternate takes reveal the band experimenting and loosening up, and Reide Kaiser's liners notes are informative and well researched. Unfortunately recording techniques at Pathe (the label which originally released these sides) were fairly outdated even for their time, and even the engineering wizards at Jazz Oracle could only do so much to compensate. Dated vocals and poor sound aside, this is an expansive investigation into one fork in the road of jazz.