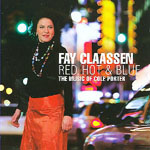 With a virtual flood of female jazz vocalists seemingly appearing every year, it is a challenge to separate the wheat from the chaff. But anyway you slice it, Fay Claassen, one of European jazz's top singers, makes the cut. Graduating from the Conservatory of The Hague in 1997, she had a host of great teachers, including renowned jazz vocalist Judy Niemack. The rich-voiced alto learned her lessons well, with clear articulation and terrific tone to complement her urbane, sophisticated approach to singing, with no trace of her native Dutch accent.

Claassen's fifth CD is her first to focus solely on the works of a single composer. The 11 Cole Porter songs that she chooses are among his most popular, so she faces a considerable challenge to find a fresh approach to each of them. Fortunately, with the superb charts by Michael Abene and a potent trio—pianist Olaf Polziehn, bassist Ingmar Heller and drummer Hans Dekker—she is able to make them her own.

She savors Abene's bluesy treatment of "Love For Sale," bringing out the sexy nature of its lyrics as she tackles it at an almost crawling tempo. She shows her romantic side in the lighter-hearted rendition of "Dream Dancing," lagging just a bit behind the beat. The quirky staccato introduction to "Anything Goes" is a refreshing modern touch, though it quickly gives way to a swinging post-bop setting. While Claassen is also an accomplished scat singer, she doesn't overdo it, unlike her previous Two Portraits of Chet Baker (Jazz 'N Pulz, 2006).

I Get a Kick Out of You; Easy To Love; Love For Sale; Ridin' High; Dream Dancing; Anything Goes; You'd Be So Nice to Come Home To; I Concentrate On You; All Through the Night; Too Darn Hot; So in Love.