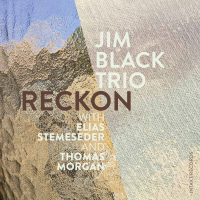 Black finds endless ways to break up and stutter a beat, evoking the electronic loops of hip-hop and drum and bass at times. But then he adds the human element, embellishing with impudent small gestures and explosive spurts, as part of the overall rattling tattoo. While Stemeseder totally buys into the percussive vibe, he displays a canny balance between tension, from repetition whether a single note or a nagging moitf, and release in suddenly unspooling glinting runs. An accomplished accompanist, Morgan never puts a foot wrong in these borderline settings, mixing elastic pulse and contrapuntal savvy.

Although all three are credited for each track, that doesn't quite tell the full story. After one recording session devoted to free improvisation, the next workshopped ideas of rhythmic feels or chord progressions, but without wringing out the unpredictability. Simple melodies, which recall the poppy calisthenics of the Esbjorn Svensson Trio emerge among the ballad stylings of "Tripped Overture" and the lilting minor key vamp of "Spooty And Snofer," with its tasty bass fills and clanking drum canter. They come closest to the tradition on the unalloyed "Neural Holiday" where melancholy feel and singing Keith Jarrett-inflected exhortation unite in heartfelt vulnerability.

Stemeseder makes insouciant but effective use of near to hand preparations (glass bottles, paper, his wallet) by integrating unusual sonorities into his taut lines, like the harpsichord like tones which pepper his unfurling discourse on the splendid "This One And This Too," which progresses from stately anthem to rackety clatter. On "Astrono Said So" he hammers a dampened note, as his contribution to a thudding intro, and keeps it going even as he threads in other short phrases, in a piece which gradually slows over its course, until revealing what might be the kernel of a tune at the death.

The success of the album is down to how they convey a composerly intent even when it's not present, all the while undermining expectations like the best improv, even when there's forethought afoot.

Astrono Said So; Tripped Overture; Tighter Whined; Spooty And Snofer; Very Query; Focus On Tomorrow; Next Razor World; Neural Holiday; Dancy Clear Ends; What You Are Made From; This One And This Too.