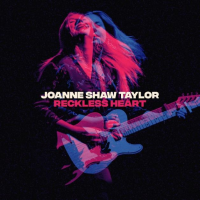 In marked contrast to Joanne Shaw Taylor's somewhat constrained approach on Wild (Silvertone/Sony, 2018), this 'girl with the big voice from the Black Country' of Britain wastes no time on the aptly-titled Restless Heart. The hell-bent-for-leather abandon with which she leads "In The Mood" lives up to its suggestive title, and packs all the more punch because she and her accompanying musicians play with the unity of a genuine band, not just an ad-hoc group of sessioneers.

The closely-bonded musicianship is fully in keeping with the 3D imagery of the album cover art, and a comparable versatility corresponding to that graphic art informs the title song; featuring an agonized vocal of Taylor's, only slightly less prominent than the work of keyboardists Phil Hale and Chris Codish, it is nevertheless her stinging electric guitar work that cements the foreboding atmosphere of that track. The way she lets rip on "The Best Thing" rescues it from patently commercial confines too, her high-spirited performance making it wholly infectious listening.

The multi-dimensional musicianship on display here carries strong implications this woman could make any number of differently-styled records subsequent to this one (she's already released a live album a CD/DVD package titled Songs from the Road (Ruf Records, 2014)). Almost equally impressive is that, as much as this sixth record of her's continues a progressively arresting string of records, it is also a work of 'firsts'—produced by close friend Al Sutton (Greta Van Fleet, Kid Rock), in her adopted home town of Detroit, it was largely recorded live in the company of the Motor City's best musicians, including a stout rhythm section in the form of jazz drummer Ron Otis and bassist James Simonson. The duo anchors the mid-tempo, soulful likes of "I'm Only Lonely," no doubt freeing the front-woman to cut loose on her vocal.

But even more notably, Reckless Heart features Taylor's courageous step in offering her initial unplugged recording (not to mention the presence of strings arranged by Maurice "Pirahnahead" Herd). Positioning "Jake's Boogie" as the last of these eleven cuts is a move all the more brave because, in the hands of lesser-skilled players and producer, this solo performance could have undermined the cumulative momentum generated through the previous tracks. But its sparse textures offer a corollary to the lush acoustic tones in the arrangement of "Break My Heart Anyway," a piece as crisp and efficient as most of its surroundings.

That noteworthy number finds Taylor following in the footsteps of artists like Buddy Guy and John Mayall (and not just in her label affiliation). The nasty riffing and accusatory tone in the singing on "Creepin'" qualifies as a nod to vintage British blues-rock, while JST unveils even more practical knowledge of roots during the smoky balladry of "I've Been Loving You too Long"; this earthy expatriate is unabashed in her homage to those heroines of soul, Aretha Franklin and Mavis Staples.

In this densely-populated field of blues-rock, what is genuine is not always what's authentic, but this towheaded Brit fuses the two virtues with a fire commensurate with her purpose on Reckless Heart. In doing so, she simultaneously upholds and extends the traditions of the genre.

In The Mood; Reckless Heart; The Best Thing; Bad Love; I’m Only Lonely; Creepin’; I’ve Been Loving You Too Long; All My Love; Break My Heart Anyway; New 89; Jake’s Boogie.