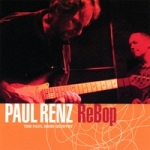 Minneapolis-based guitarist/educator Paul Renz gets a surprisingly fat, hollow-body tone out of his Fender Stratocaster. Although the instrument may seem like an unlikely choice for a guitarist performing mainstream jazz, Renz is able to coax a tone that is serene and warm. For Rebop the Strat-wielding Renz teams up with flautist Anders Bostrom, pianist Brian Ziemniak, bassist Eric Graham and drummer Nathan Fryett.

With the exception of Bud Powell's "Un Poco Loco," the disc consists of Renz's lively and lyrical original compositions. The guitarist emphasizes juicy harmonic progressions, flowing melodies and tight, toe-tapping grooves. The easy street tempo of the title track serves as a bebop-friendly warm-up for soloists Renz, Bostrom and Ziemniak. The swing-meets-fusion vibe on "Un Poco Loco" and "Sloppy Joe" has a hip edginess that will appeal to casual listeners and enthusiasts alike. Renz's strongest writing comes out toward the end of the disc with the lush ballad "Farewell HP" and the rocked-out "Dish It Up." The latter showcases the session's most inventive improvising, courtesy of the leader's distorted, untamed lines.