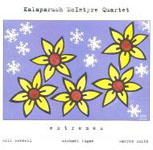 With a relatively small number of recordings in his own right over a 40-year career, any release from AACM veteran Kalaparush Maurice McIntyre is cause for celebration. His fourth outing for the CIMP label showcases a new quartet featuring the even-more-underexposed Will Connell (alto saxophone and bass clarinet), longtime associate Michael Logan (bass) and childhood friend, but now master percussionist, Warren Smith, alongside the leader's tenor saxophone.

In a 70-minute program mixing compositions with studio inventions, a loose, almost jam session, vibe prevails. But with an aggregate lifetime of over 260 years, all four are savvy enough to extemporize with a sense of structure no less apparent than on the prearranged pieces. McIntyre links back to another era, like fellow Chicagoan Fred Anderson, expressing himself more through a personal sense of timing and shaping of a phrase than use of extreme registers. Connell's tart, sometimes even acerbic, alto makes a winning foil for McIntyre's lush tenor, both well captured by the unvarnished CIMP sound. Logan buoys up the frontline with his muscular plucking, allowing Smith to embellish the rhythm with the most fitting timbre, dynamic or texture from his arsenal, as if following an unwritten score.

McIntyre's outstanding feature comes on the tender dirge of "Closeness," where he declaims slowly and lyrically over a sparse rhythmic backdrop. Elsewhere Connell takes a forceful solo on the funky "Gone," while Smith drives the horns with dancing percussion on Logan's playful "Earthbound." But it is the collective genesis of the long, slowly building "Early Morning" and the intense "Words of Warning" which justify celebration, waves of intuitive group interaction coalescing into a whole greater than the sum of this outfit's not inconsiderable parts.

Self Knowledge; What do you see when you don