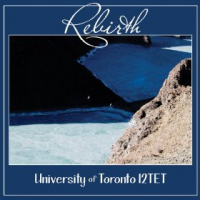 You'd be hard-pressed to find a more congenial curtain-raiser than Jason Stillman's animated, inflexibly swinging "Contemporary Insanity," which opens Rebirth, the debut album by the University of Toronto's snug and well-upholstered 12TET. That's admittedly a tough act to follow, and while the ensemble gives it the old college try it doesn't always live up to the promise of that bright beginning, a shortcoming that can be ascribed in large measure to charts that, while purposeful and assured, simply aren't as irrepressible or engaging as "Insanity."

That's not to say the 12TET isn't proficient, as director Terry Promane, a splendid musician in his own right, wouldn't have it any other way. But the other four newly minted compositions, including Promane's "The Shadow Knows," are by and large less than spellbinding, even though each has its individual moments of substance and charm. "The Shadow," whose urbane framework enfolds a laid-back tenor solo by Landen Vieira, precedes pianist Noam Lemish's unassuming "Rebirth" and trombonist Michael Brooker's even-tempered "BO" (on which he solos with alto Matt Woroshyl and bassist Jeff Deegan). The venerable standard "September in the Rain" is a showpiece for vocalist Laura Swankey who sings earnestly but otherwise fails to entice one's ear in spite of a superb chart that kindles memories of Canadian colossus Rob McConnell. The finale, saxophonist Donny McCaslin's free-spirited "Claire," is likeable enough, its emphatic rhythms and punchy brass underscoring compatible solos by Ben Hognestad (on electric piano) and Vieira. Hognestad and Vieira are polished ad-libbers, as are Woroshyl, Lemish, Deegan, guitarist Alexei Orechin and vibraphonist Bryan Gilmartin.

Even though the material could be stronger, Rebirth furnishes clear evidence that the university's Jazz Studies program is on an upward curve, coming as it does on the heels of the UT Ten O'Clock Orchestra's superb album, Reflections, under its new director, Gordon Foote. With that in mind, a second endeavor by the 12TET would by no means be unwelcome.

About University of Toronto