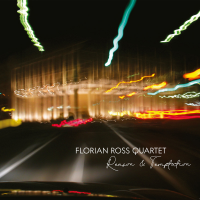 Midsummer 2019 was quite a busy time for Florian Ross. Apparently, the German-born pianist recorded the quartet date Reason & Temptation from June 29-July 2, then returned the following day to the same studio in Koln and added a wind ensemble to record Architexture for another label (Naxos). Reason & Temptation was self-produced on Ross's own label, Toy Piano Records.

In each case the core group consists of the pianist's working quartet—saxophonist Sebastian Gille, bassist David Helm , drummer Fabian Arends—reinforced on Architexture by the seven-member Event Wind Ensemble directed by Susanne Blumenthal. Besides manning the keyboards and leading the ensembles, Ross serves as principal composer and arranger. He wrote and scored five of the thirteen numbers on Reason & Temptation, and (presumably) composed and arranged each of the themes on Architexture, every one of which is either dedicated to or inspired by people or places around the world. One of them, "Brinkwells Cottage," is based on the Enigma Variation No. 9 of Sir Edward Elgar, to whom it is dedicated.

While Ross's approach might best be described as avant-garde or exploratory, it is neither atonal nor inharmonious. Even as he and the group skirt the outer limits of musical orthodoxy, they seldom lose sight of the essential building blocks—melody, harmony, rhythm—on which a pleasurable listening experience so often depends. Having said that, it should be noted that Gilles' solos in particular are more esoteric than candid, and much of the music, especially on Reason & Temptation, would perhaps be more well-received at a coffee house, hip basement or loft than, say, a nightclub or concert hall. Tempos are generally languid, moods dark and cheerless. Exceptions are the gently swinging "Rondo #4" and relatively light-hearted "Broomstick." The closing "Fever Dream," another gloomy manifesto, is cushioned by woodland sound effects.

Insofar as engaging music is concerned, Architexture is mildly disappointing, as more was expected. The wind ensemble is useful at times but, even so, is unable to dispense adequate sunshine to a generally bleak and shadowy environment. Again, there are exceptions: the lyrical "Maya," which brings out the best in the wind ensemble, as does "Development Three"; the rhythmically bright and harmonically clever "Development Four"; the melodious "Brinkwells Cottage," on which the wind ensemble is most prominent, and the bracing finale, "Oscar." This is, of course, one layman's imperfect opinion; Ross's music and that of his colleagues may prove far more impressive and engrossing to those whose minds and ears are better suited to receive and unravel its message. Suffice to say that it is not designed for or aimed toward the musically unschooled. A word to the wise should be enough to underline the point.