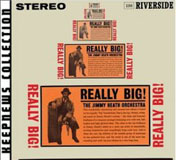 The ten-piece band on this invigorating 1960 Riverside release by Jimmy Heath wasn't "really big, but the talent level of the artists certainly was. How about Clark Terry on trumpet, Nat Adderley on cornet, brother Cannonball on alto sax and either Tommy Flanagan or Cedar Walton on piano? Plus, all three Heath brothers (Jimmy on tenor sax, Percy on bass and Tootie on drums) recording together for one of the first times ever on Jimmy's second date as a leader and his first with such a large group?

Reissued as part of the Keepnews Collection, featuring remastered versions of classic albums from legendary producer Orrin, Really Big! highlights Jimmy Heath's formidable skills as a composer and arranger on a set of mostly upbeat, beboppish originals along with well-conceived covers like "On Green Dolphin Street (with a burning solo from Cannonball) and "Dat Dere, then a recent hit penned by the Adderleys' associate Bobby Timmons.

What's most impressive here is the maturity and sophistication of the ensemble's playing and of Heath's vision for the project, given the relative youth of most of the band members. Terry was the veteran of the group at forty and while several of the artists were well-respected at the time, only Cannonball Adderley had really broken out as a star. For Jimmy Heath, still going strong as he celebrates his 81st birthday this month, and the other performers in this truly all-star lineup, Really Big! was a taste of really big things to come.