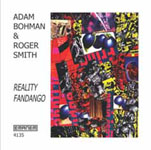 Roger Smith has, in common with other guitarists mining this seam of free improvisation, worked beyond the perhaps pervasive influence of Derek Bailey. Such are the dry, dynamically constricted soundscapes he fashions here in company with violinist Adam Bohman that a distinct instrumental vocabulary emerges. The music as such is documentation of a work in progress, and this is just as it should be, antithetical as it is to the notion of playing licks or simply rehashing a collection of personally favored musical devices. Bohman underscores this in the extent to which he evidently prepares his violin in readiness for making the music. The results are as far from the conventional vocabulary of that instrument as they could be.

It might be said that the disregarding of received notions is the key to getting something out of what's on offer here, and once the listener has come to terms with the uncompromising nature of the music its rewards are nothing short of unique even in a field where musical personality can sometimes be sublimated in the service of a greater, more amorphous whole.

The programmable nature of the CD format means the listener has the opportunity to break the music down into two programs, and doing so is actually reflective of how the music was captured. "Look At A Foot," which clocks in at just over twenty-five minutes, and "The First Question," which comes in at just over thirty-five, by nature of their very duration chart the flow of ideas between the duo. They offer insights into how both conventional and extended techniques are subverted in pursuit of a sound that can only be described as arid; alive at times with passing details, whilst at others seemingly so sealed off from the wider world that the duo seems to be making music for themselves and no-one else.

The remainder of the program is made up of four tracks recorded over a year later, and they find the two musicians in a less expansive mood. By way of notable contrast not one of them tops the three minute mark, but that significant difference has no bearing upon the music produced. The use of amplified guitar on "Your Friend" comes as something of a shock if only for how forcibly it reminds the listener of how both musicians veer towards the use of their instruments almost as pieces of percussion. It's a point in itself underscored by the fact that all the music was recorded in the far-from-resonating acoustic environment of Smith's kitchen.

Come In; The First Question; Your Friend; Look At A Foot; Yes, This; So.