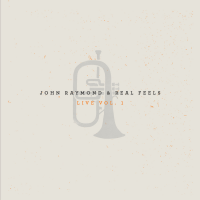 Trumpeter John Raymond's Real Feels trio with guitarist Gilad Hekselman and drummer Colin Stranahan earned praise for the titular studio release earlier in 2016 with its fresh and modernist take on classics pop tunes and beloved hymns. They took that vibe to the streets in numerous gigs and venues capturing the magic from two dates in Real Feels -Live Vol. 1

The set recorded at the BLU jazz club in Akron, Ohio begins with a crisp solo and Nawlins flavored drum cadence in the beloved gospel hymn "I'll Fly Away" followed by Raymond's smooth Flugelhorn and Hekselman's funky nuances on electric guitar. It sets a party atmosphere which with raucous applause from the crowd.

Beautifully recorded, the music's inviting aura and intimacy is heard in no-holds-barred performances which highlight the trio's interaction and musicality. They jazz the upbeat tunes with a funky intensity and poignantly reimagine Paul McCartney's timeless Beatles song "Yesterday" with intimacy experienced in a tender cymbal brush, velvet-toned horn, and harmonious guitar chords.

"Amazing Grace" is quite memorable as Raymond oozes the theme with his butter-toned horn, Hekselman's Mid-West rural twangs and soulful finger manipulations while Stranahan pumps a rhythmic backbeat whose music could ease a troubled soul. One of the funkiest joints is the redo of Woody Guthrie's classic "This Land Is Your Land" where everyone walks a tightrope teetering on abandon and control.

The cherry on top is "Minor Silverstein" recorded live at the Los Angeles' Blue Whale jazz club. Composed by bassist Chris Morrissey, it contains a spellbinding groove with looped electronic trimmings that linger long after the melody fades to black. Raymond's Real Feels trio authentically captures the spirit of feel good music and while the prior studio release was outstanding, this live recording is stellar.

I'll Fly Away; Yesterday; Atoms For Peace; Amazing Grace; This Land Is Your Land; Minor Silverstein.