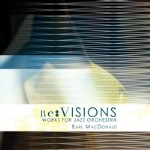 There are far too few big band albums being recorded these days, so it is with great appreciation that the music of professor Earl MacDonald finds its way to the studio for lovers of the genre to enjoy. Harnessing the talents of a 17-piece, world-class orchestra, MacDonald—a composer/arranger/pianist and director of Jazz Studies at the University of Connecticut—manages to produce a scintillating frame of big band orchestrations on Re: Visions. No stranger to the big band arena, MacDonald is an award-winning arranger who served as musical director for the Maynard Ferguson Big Bop Nouveau Band, and also leads the University of Connecticut Jazz Ensemble. Accordingly, it is not his fine skills as a pianist that make this album worthy, but the brilliant compositions and perky arrangements that make the music special.

Kicking off with "Friday Night At The Cadillac Club," a chart for which MacDonald received the 2002 Sammy Nestico Award for Outstanding Big Band Arranging, guitarist Pete McCann and drummer Jordan Perlson provide the fuel that propels the piece. Commissioned by the USAF Airmen of Note in 2003, "Mr. Sunshine" delivers a more sophisticated sound, inserting an aggressive horn section with trumpeter Joe Magnarelli and tenor saxophonist Jim Brenan. MacDonald's appropriately titled "Measuring Up" highlights a slew of soloist including former Rolling Stones saxophonist Tim Ries on soprano and Ralph Bowen on tenor, with Steve Kenyon blowing the baritone as McCann reels off a rock-like guitar riff on a number that measures up as one of the best on the disc.

MacDonald emerges on the piano in a "Bad Dream"—a buoyant lively piece diced with a slice of brass, the drummer's stick work, and the performance of some free-style improvisational lines or a portion of contrafact melodies drawn from the standard "You Stepped Out of A Dream," all marking this tune as anything but sleepy. In an arrangement originally written for Maynard Ferguson, "Joshua" is tastefully introduced by bassist Kenny Davis, and takes off on Bowen's searing tenor lines, moving into mid-tempo territory that sounds quite like a number the Ferguson band would have performed. Dizzy Gillespie's "Woody n' You" is given a Latin jazz treatment, providing Magnarelli and Bowen more solo space on this lively burner.