The Miyumi Project: re: Rooted 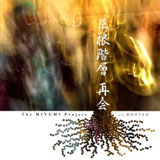 The use of violin and shinobue (a Japanese flute) reaches back into tradition to instill a unique flavor. Thus, modern jazz receives an influx here from Asian culture, tying them together naturally. Aoki's bass ensures that the session remains in focus; however, he's granted the band considerable freedom on re: Rooted. The Miyumi Project's Rooted: Origins of Now (Southport, 2002) revealed Aoki's views on the evolving Asian/American experience. This time out, the band revels in the freedom that can be had through modern jazz.

Based in Chicago, Aoki was born in Tokyo into a family subsumed under an extended cultural troupe of percussionists, shamisen players and dancers. His first instrument was the taiko drum. With The Miyumi Project, he's retained tradition while enjoying the freedom allowed in modern jazz.

Aoki's eloquent double bass soliloquy on "Lacquer best describes the manner with which he wishes to communicate. His heartfelt message hits home. Under Aoki's direction, the band follows with a release that delves into the personality of Chicago's improvised music scene. As the two traditions meet, we're the recipients of this accessible and interesting performance.

Episode One; Episode Two; Episode Three; Shadow to Shadow and Beyond; Lacquer; Gate.

About The Miyumi Project