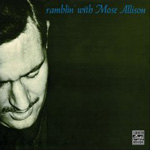 Through a career spanning a half-century, Mose Allison has been known mostly for his bluesy hipster vocals and comical compositions like "Your Mind is on Vacation, But Your Mouth is Working Overtime. But he's also a fine bebop-flavored pianist who even spent time back in the '50s in the rhythm sections of such jazz titans as Stan Getz, Al Cohn and Zoot Sims.

The recently reissued Ramblin' with Mose, originally released in 1958, puts Allison's piano front and center, leading a trio with Addison Farmer on bass and Ronnie Free on drums. There's just one vocal here, a typically nonchalant stroll through Joe Liggins' "I Got a Right to Cry. The rest of the selections are instrumentals, including five Allison originals and standards like "Old Devil Moon and "Stranger in Paradise. Allison proves himself easily up to the task of leading a straight-ahead jazz group, deftly blending bop, blues and a touch of boogie-woogie in a relaxed style reminiscent of Nat King Cole, Teddy Wilson and Count Basie.

Like Cole, Shirley Horn, Diana Krall and many other singers who accompany themselves on piano, Allison's keyboard skills have sometimes been overlooked. This nearly fifty-year-old album won't make anyone forget about Mose the singer, but it may help them appreciate Allison the pianist.

I Got a Right to Cry; Old Devil Moon; The Minstrels; You Belong to Me; Stranger in Paradise; The Kissin� Bug; Ramble; Saritha; Old Maj John; Ingenue.