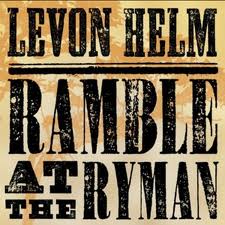 The Arkansas delta grit is gone from his voice, replaced by age and disease with the well-sanded twang of an American Southern Isaiah, if Johnny Cash were a stern Elijah. Levon Helm was the first voice among equals in The Band, sharing vocal duties with the equally distinctive vocals of bassist Rick Danko and pianist Richard Manuel. The only American (necessarily Southern) in a band of Canadians, it was Helm's dusty tenor that lent an American authenticity to the Band's rural miniatures like "Up on Cripple Creek," "The Night They Drove Old Dixie Down," and "The W. S. Walcott Medicine Show."

Helm has been touring the last number of years with a musical revue he calls his "Ramble," an outgrowth of his "Midnight Rambles," formal and informal performances with noted artists at the singer's studio in Woodstock, New York. Helm's Rambles generally feature artists joining the festivities, in the case of Ramble at the Ryman, bluesman Sammy Davis (no, not The Candy Man), Sheryl Crow, and John Hiatt, who fits into "The Weight" like he belonged there all along. This lineup serves to rest Helm's voice by not forcing him to sing every piece.

"The Weight" not withstanding, "Chest Fever" remains one of the Band's most durable songs. Nonsense lyrics assembled by Helm and Manuel are propelled by Robbie Robertson's ascending riff. Once a vehicle for organist Garth Hudson's classical jones, the Ramble gives the piece to multi-instrumentalist Larry Campbell to brag on his guitar skills, channeling Hudson's introduction on Music from Big Pink (Capitol, 1968). The arrangement and playing are tighter and more polished than the original performances, thoughtfully practiced and arranged. The Ramble employs a full horn section (with tuba) recalling the format on 1972's Rock of Ages (Capitol). The sonics are robust, if not white-hot. Vocals are handled by the ensemble as the original was, with Helm readily apparent on the chorus. This is a proper show-closer before the encore. This isn't The Band, but it is Levon Helm.