By Jim Santella
August 8, 2008
Sign in to view read count 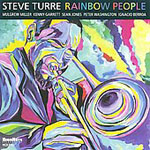 Trombonist Steve Turre carries the jazz torch high, noble and filled with blues tones that ramble eloquently. His trombone expresses each personal theme with a knowing ear and a high, tenor vibrancy that resonates with the psyche of an artist who has a story to tell. The message comes at you with the emotional force of a Caruso, Carreras or Pavarotti. His trombone has developed into a vocal instrument through which he sends out thoughts and impressions with remarkable accuracy. At times, Turre will growl through the horn and others he'll bounce notes like a basketball. Mostly, however, he prefers lovely melodies that float on high like personal arias. Working with pianist Mulgrew Miller, bassist Peter Washington and drummer Ignacio Berroa on this, his 13th album as leader, Turre turns to the jazz forces that unify, those inspired by mentors such as Woody Shaw, Art Blakey, Dizzy Gillespie, Rahsaan Roland Kirk and Ray Charles. Using original tunes for most of the album, trombone, with occasional frontline partners, explains each theme and relates its story gracefully.

Turre dedicates "Brother Ray" to Ray Charles with a big blues mood that simmers nice and slow in its comfortable rhythmic juices. His program crosses generations with a splash. Trumpeter Sean Jones gives "Midnight in Madrid" the sparkle of a classical Spanish accent while alto saxophonist Kenny Garrett adds in-your-face musical bullets to Charlie Parker's "Segment." Opening with the title track, Turre emphasizes jazz' modern mainstream sources through close contact with syncopated melody and bruising groove. As he closes with a dedication to the late saxophonist Mario Rivera, Turre and Garrett send out melodic postcards over a sizzling rhythmic foundation with a steady heartbeat folded in by conguero Pedro Martinez. This enthusiastic Latin jazz closer, enhanced by Turre's conch shell solo at song's end, sends a message: jazz isn't just for a small segment of the listening public; it's for everyone.