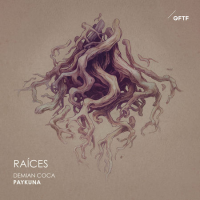 Looking at a title that means "Roots," one naturally thinks of an artist paying homage to their place of origin. It's not quite that simple in the case of Paykuna; the group's well-traveled leader Demian Coca has roots in both the folk of South America and the classy modern jazz of Europe, specifically his home of Switzerland. The combo isn't quite a big band, though the front line's dual horns have a little of that jaunty swing. Coca's piano playing doesn't just mean folk or stride, though there are hints of both. Raíces does that same kind of balancing act overall: it uses often-recognizable elements in ways that come out not so obvious after all.

That's largely down to a mix of sharp players and Coca's bopping hooks (among other things). The first couple of tracks lean brightly Brazilian without necessarily going full samba. Following shortly, the sprightly "Celeste" goes more into mid-century swing until an outbreak of flute turns it airy and chamber-ish. Some melodies ease and drift with an assured lack of urgency; other spots may just as likely benefit from snappy catchiness or even some crank-up-and-wail electric guitar. Whatever the mood, the band is having fun and happy to be exploring it.

Coca's hand behind the charts shows some thoughtful care in arranging the septet's ins and outs. The central meditation of "Piedras" makes a thoughtful oasis amid the toe-tappers, while "K'antus" taps into the primal jungle and the slinky title track cooks in a jaunty 7/4. Paykuna can be deep and earthy or light as the breeze, impressively managing to present the familiar with a fresh worldly angle.