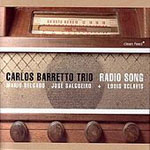 Barretto's resume is filled with stints accompanying Mal Waldron, Barry Altschul, Don Moye, Karl Berger and Steve Lacy, among others. A stalwart bassist and a magnanimous leader, he contributes selflessly to the trio, providing ample space for his band members' solo excursions. His phrasing is subtly prudent, never prone to flashy excess, even during his own lyrically focused solos. Joined by guitarist Mario Delgado and drummer Jose Salguero, the trio makes a joyful noise, shifting gears from propulsive to introspective in a heartbeat.

Guitarist Mario Delgado is a wonder; from delicately picked arpeggios to fret-shredding blasts of distortion, he reveals an encyclopedic knowledge of guitar history. Driven by Barretto and Salquero's rollicking vamps, Delgado often launches into aggressive volleys augmented by various EFX units. Coaxing formidable sheets of sound from his instrument, he conjures a hybrid of raw, jazz-rock fusion and impetuous, electric free jazz.