BY JASON CRANE
September 26, 2006
Sign in to view read count 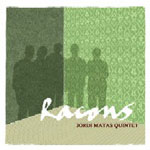 "After The Gig," the opening track on Racons, sounds like an electrified Oregon—not so much because of the instrumentation as the metrically loose but rhythmically sophisticated interplay of the quintet. That said, the reedy and lilting soprano sax work of Marti Serra runs through the track with Paul McCandless' shoes on.

Jordi Matas is a fine writer of sometimes dark, sometimes playful electric music that sits solidly in the modern guitar tradition. He's done an excellent job recruiting his band, including the stellar Jorge Rossy, whose Fender Rhodes playing is the perfect complement to the denser moments of Matas' own guitar accompaniment. (And yes, Jorge Rossy is usually the drummer with Brad Mehldau's band.)

If you're an electric guitarist who uses the guitar for its space-filling properties rather than for shredding, it can be a challenge to escape the shadow of Bill Frisell. Matas does an admirable job crafting his own sound, and he manages to find something interesting to do in each piece, whether it's the descending arpeggio figure on "Vacio" or the angular solo on "Final Para Una Suite De Verano."

This is Matas' second record for Fresh Sound New Talent. As on his debut, All That Matas, he wrote every tune here. There are several standouts, including those mentioned above and "Belleza Oculta," an intricate duet between Matas' guitar and Rossy's acoustic piano. The piece surges forward and retreats, carried along at times by Matas doubling his guitar with a pleasant falsetto.

This is an album that bears repeated listening from a guitarist who deserves more exposure.