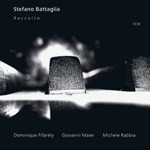 As the international community becomes increasingly aware of the vibrant Italian jazz scene through labels like EGEA and Cam Jazz, it's important to remember that ECM has also brought artists like trumpeter Enrico Rava, accordionist Gianni Cosca and reedman Gianluigi Trovesi to broader audiences.

Add to that list pianist Stefano Battaglia, who has been on the scene for nearly twenty years, recording over a dozen records for the Splasc(h) label. On his ECM debut, the two-disc Raccolto, Battaglia demonstrates, in the context of mainly free improvisations, how changing one member of a trio can significantly alter its complexion, while still maintaining a consistency of approach otherwise. Percussionist Michele Rabbia, heard recently on Salvatore Bonafede's more accessible Journey to Donnafugata (Cam Jazz, 2005), teams with Battaglia on both discs, with bassist Giovanni Maier joining them on disc one, and violinist Dominique Pifarély—no stranger to ECM fans through his work with Louis Sclavis and his duet with pianist François Couturier, Poros (ECM, 1998)—rounding out the trio on disc two.

Both discs share an improvising aesthetic more rooted in a classical approach than the jazz tradition, which is no surprise given Battaglia's background as a classical performer, despite some serious jazz credentials gained working with artists like Kenny Wheeler and Dewey Redman. But even the few composed pieces—including the starkly majestic title track—avoid traditional rhythm section confines. Maier is an equal participant in evolving its abstruse yet elegant theme, while Rabbia adds texture, not rhythm. "Triangolazioni may feel like a free piece, with the members of the trio seeming to constantly circle around one another, but while Battaglia's theme is sometimes less than obvious, it does rear its head as a dark harmonic foundation that gradually builds with purposeful drama.

The trio on disc one explores tenebrous territory, and the atmosphere occasionally becomes heated, but for the most part space and subtle interaction defines a peculiar kind of beauty.

Disc two occasionally mines similar turf, but it's more oblique. Pifarély shares Battaglia's classical roots, but is a more jagged player, motivating the others to greater extremes. Battaglia's touch is lighter on disc one; with Pifarély he explores the farthest reaches of his instrument on "Canto I, much as Paul Bley did on Not Two, Not One (ECM, 1999). But with Maier on a variety of non-kit percussion instruments, there's little to tie this improvised music to conventional jazz. "Il Circo Ungherese, if anything, references Béla Bartok's distinctive subsuming of Hungarian folk music within contemporary classical concerns.

And while there's little defined form, there is clear intention and unmistakably open ears. The jagged duet "Réminiscence pur Violon et Piano may be created in the moment, but despite its outré leanings, it manages to feels constructed and preconceived.

Raccolto, with the opaque beauty of its first disc and the greater extremes of its second, illustrates two sides of the same coin. This album is sure to please those who appreciate that improvised music is by no means strictly associated with the traditional jazz world.