By Edward Blanco
February 1, 2009
Sign in to view read count 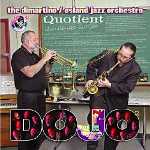 Vince DiMartino was a distinguished professor of trumpet at the University of Kentucky's Jazz Studies Program for twenty years, and saxophonist Miles Osland is its current director. Together these two educators have collaborated for many years, founding of The DiMartino/Osland Jazz Orchestra. Through its performances and recordings, it has become a fixture in the central Kentucky area. Quotient is the group's first offering since Off The Charts (Sea Breeze, 2001), and from the sounds of this one, there is indisputable evidence that the duo's formula for riveting big band music, has worked its magic once again.

There's plenty of good material here with this album, as it contains 79-plus minute of exciting big band music and a repertoire of fifteen select standards, some familiar and others less so but all still enticing enough. From the loud and boisterous rendition of Artie Shaw's "Begin the Beguine" to the energetic jumpy arrangement of Dizzy Gillespie and Charlie Parker's "Anthropology" and Tom Kubis' killer arrangement of the time-honored classic ,"Speak Low," featuring a torrid alto solo from Osland, there are more than enough fiery pieces to keep the toes tapping and the fingers snapping.

Other mid- to high-temperature charts not to be missed include Frank Mantooth's arrangement of "Mean To Me," featuring a light intro from bassist Danny Cecil with Osland on the flute, a burst from the brass and eventually engaged by DiMartino on the trumpet. Another is Mike Tomaro's "A Sideward Glance," where Osland takes the alto saxophone for one emotional ride. DiMartino holds center court with a marvelous performance as his trumpet voice leads the band in a somber read of "My Funny Valentine."

Vocalist Angie Ortega weighs in on Bob Mintzer's upbeat, hand-clapping "TV Blues," which also showcases pianist Raleigh Dailey. She also sings to the Gershwin brothers "I've Got A Crush On You," the disc's other vocal piece. The only true ballad in is Mantooth's "Erica," where DiMartino is heard on both trumpet and flugelhorn, laying down various gentle lines. The co-leaders step aside on the blistering "Late Shift Blues," as Gordon Towell's tenor and Rick Cook's trumpet provide the leading voices on this sensational number.

For those aficionados of the big band genre used to the sounds of the famous West Coast jazz orchestras and the East Coast monster bands, take note for there's a formidable near-Midwestern ensemble that packs quite a wallop and deserves attention. The DiMartino/Osland Jazz Orchestra delivers a brassy and spectacular hard-driving performance on Quotient, making this album a joy for those who crave big band orchestrations and superb solos throughout.

Quotient; Begin the Beguine; Speak Low; Blues In My Shoes; Mean To Me; A Sideward Glance; TV Blues; My Funny Valentine; Anthropology; Better Believe It; Erica; Late Shift Blues; I've Got A Crush On You; Easy Does It; America.