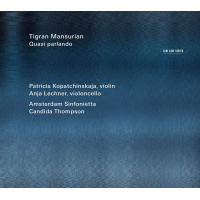 Armenian composer Tigran Mansurian's poignant and introspective Quasi Parlando on ECM consists of four string concertos. Two penned almost three decades apart and two others that he wrote specifically for each of the soloists on the album; violinist Patricia Kopatchinskaja and cellist Anja Lechner. The unifying theme of this splendid disc, and one that recurs throughout most of Mansurian's opus, is a sublime, almost effortless, narrative sense endowed with a timeless mysticism.

The music is laced with both sorrow and solace, often simultaneously as is clearly heard on the penetrating and profound "Four Serious Songs For Violin And String Orchestra" from 2006. On the first movement of this, somber yet lyrical, musing on death's inevitability Kopatchinskaja's throbbing, visceral sound flavors the stream of consciousness pondering of the Amsterdam Sinfonietta with quiet grief.

Her passionate and achingly gorgeous solo on the second is mournful yet enveloped in a gossamer spirituality. Conductor Candida Thompson deftly leads the Sinfonietta in an incandescent, and discreetly celebratory performance, rich in Armenian folk motifs, that undulates around Kopatchinskaja's violin. The brief "Allegro Vivace" burst of darkly hued whimsy before the stately, funèbre final section. The latter opens with an angelic serenity that Kopatchinskaja's violin shatters midway with her vibrant, wailing strings. The piece is simultaneously a celebration of life and rage against its finality.

Fragments of Armenian popular melodies color the melancholic and emotive "Romance For Violin And String Orchestra" (2011), composed for and dedicated to Kopatchinskaja. The violinist's unadorned and tender bowing echoes against the ensemble's fluid refrains. Kopatchinskaja's anguished, yet restrained dramatic phrases precede the transcendental, placid closure.

The title composition written for Lechner in 2012 is perhaps the most recitative of the recording. Thompson and the Sinfonietta establish an expectant, vivid ambience replete with folkloric patterns. Lechner's poetic, agile cello takes center stage as it resonates with humor, sadness and intense fervor. Her pizzicato tones bounce off the orchestral din with subtle theatricality leading to her concluding, con arco solemn chant.

Lechner and Kopatchinskaja's virtuosity shines on the haunting, 1978 "Double Concerto For Violin, Violoncello And String Orchestra." Lechner's strings reverberate wistfully while Kopatchinskaja's mellifluous violin glides in hypnotic patterns. A tense dialogue evolves between the two soloists over a backdrop of Sinfonietta's fiery sonic flourishes that flirts with dissonance. The intense symphonic ambience melts into a pensive tranquility as the first part ends.

The second passage, in contrast is more intimate and reflective. Kopatchinskaja's forlorn yet elegant violin punctuates the somber atmosphere with warmth and compassion. Lechner's reserved, and exquisite cello is sedately nostalgic. The flowing musical chronicle ends on a deeply elegiac note.

Part due to the choice of material and part to the deep sympathy the musicians have for Mansurian's oeuvre, this record serves as an overview of the composer's uniformly superb career. It also demonstrates that the intervening thirty-four years between the oldest and newest works have not dampened his creative zeal but instead enhanced it with a contemplative maturity