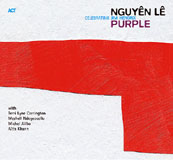 Originally released in 2002 but only seeing release in the United States five years later, Purple: Celebrating Jimi Hendrix—alongside welcome 2007 reissues of Miracles (Universal, 1990) and Zanzibar (Universal, 1992) and the more recently recorded Homescape (ACT, 2006)—provides an increasingly balanced picture of guitarist Nguyên Lê. He may be considered by most to be a fusion guitarist, and his often overdriven, almost always processed tone may well fit within that definition, but there's always been more to Lê than electric energy and indisputably strong chops.

Tackling a set of ten songs belonging to a rock icon may seem blasphemous, but Lê finds ways to both revere the late guitarist and make each song his own. There's plenty to be familiar with for Hendrix fans, but ultimately far more surprises. There was plenty of speculation about a jazzier direction for Hendrix in his final days, including jams with John McLaughlin, Larry Coryell and others. Had the guitarist lived, it's hard to imagine his turning the psychedelic into the abstract, as Lê does on a dark-hued version of "Third Stone from the Sun. Lê and his core trio of bassist Michel Alibo and drummer Terri Lyne Carrington take considerable liberties, with Lê's clean, highly sustained tone layering the song's familiar theme over a more complex harmonic foundation that's definitive of the entire set.

Equally, "1983... (A Merman I Should Turn to Be) blends more modernistic psychedelia with richer changes bolstered by pianist Bojan Zulfikarpasic (better-known as Bojan Z), though when the B section is reached it rocks harder. "Purple Haze" does as well, though it's more buoyant and up-tempo than Hendrix's take—and Hendrix never played in 15/8. "Burning of the Midnight Lamp is a gentle ballad, while "Voodoo Child (slight return) opens in world music territory, thanks to Karim Ziad's North African stringed gumbri and percussion, ultimately alternating between greater cosmopolitanism and a four-to-the-floor groove propelled by guest bassist Meshell Ndegeocello for Lê's lithe yet blues-drenched solo.

Meshell Ndegeocello also guests on the deeply funky "Are You Experienced, which features a definitive solo from Lê, bringing together rock interests, broader jazz vernacular and Allan Holdsworth-informed legato with an Oriental microtonality that always has been part of this Parisian-born Vietnamese's heritage.

Three singers—Carrington, Corin Curschellas and Aida Khann—stretch Hendrix's words into two languages. As liberal yet reverent in their approaches as Lê, they take things considerably farther and with greater facility than the self-admittedly limited Hendrix was capable of vocally.

If the best tributes are those that take their references as starting points for more personal exploration, then Purple: Celebrating Jimi Hendrix is an unequivocal success. That Hendrix's raw but for its time, forward-thinking music has been reshaped into such a contemporary context with its own innovations, supports Lê's position as an artist possessing an unmistakable voice all his own.