BY MARK SULLIVAN
January 22, 2019
Sign in to view read count 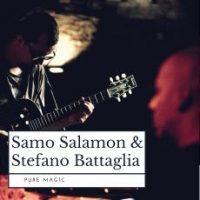 Slovenian guitarist Samo Salamon and Italian pianist Stefano Battaglia present a sequel to their first live collaboration WindS (Klopotec Records, 2016). That album included a couple of Salamon compositions along with several collaborative tracks—this time the duo have gone all in with a fully collaborative program, recorded in the studio.

"The Beauty of Kei" opens the set in a reflective mood, both instruments exploring harmonically ambiguous chords, the guitar almost sounding like overtones of the piano part at first. After a piano introduction, "Slick" features plenty of overdriven fusion-style guitar. Battaglia takes center stage for the meditative "The Seventh Seal." "The Fifth Element" ends with a lively pointillistic duet, including what sound like bell sounds from prepared piano. "Octaves" gradually devolves into a lengthy backwards-looped guitar solo, easily the most electronic sound on the album.

"Androidream" ends the session with extensive prepared piano, sounding at different times like bells, gongs, and a celesta, while Salamon contributes scraped and harmonic sounds. It can be difficult to tell who is playing what, as both instruments abandon their traditional roles. An appropriately dreamlike conclusion to an album full of spontaneous, stream of consciousness playing.

Pure Magic is a deeper exploration of the impromptu approach begun on the previous duet recording. By turns impressionistic, abstract, lyrical, noisy and occasionally dissonant, it showcases both the creative chemistry between the players and the wide range of sounds they produce.